I recently had the pleasure of photographing the new Hospira building in Rocky Mount, North Carolina for Integrated Design. It was a very intricate and detailed process that began in August and ended four months later in December. The building took four different calendar days to shoot and I’ll describe this with a little more detail than my usual blog.  As typical with my architectural work, I was able to scope the site in advance of the shoot.

A recurring theme you’ll find in my blogs is the challenge of working around the ever-changing weather, particularly when you have several clients waiting on you.  Day One was supposed to be sunny, but it was overcast the entire morning.  Therefore I focused on interior spaces in which the windows weren’t an important factor, including the main entry lobby.  The furniture layout was pretty much as you see here, I merely shifted them a bit for the photo to read cohesively and cleaned up the scene a bit (phones, entry mats, etc.).  There are two window bays which serve as a visual transition from lobby into the lab area, all the way to the exterior window.  Post-edit, I removed a television display that was to the immediate left of the elevator doors. 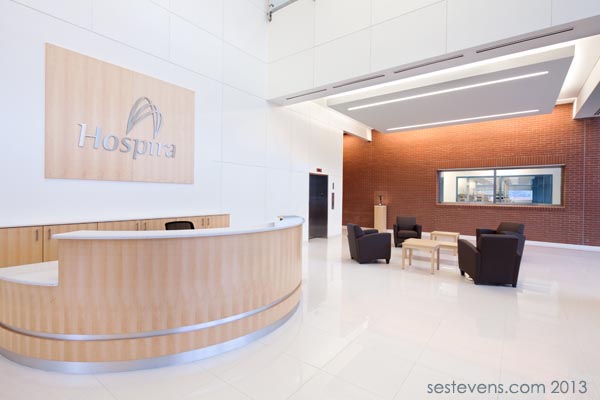 The majority of interior shots needed to be in the morning, so most of the day I just kinda hung around, getting work done on my laptop and glancing often at my Weather Channel app.  The weather DID clear up – late – about an hour before sunset, enough to capture some exteriors.

This shot below focuses on the pronounced dividing wall, building shell, and exterior corridor in the warm bath of afternoon sun.  One of the rare times I used a 45mm tilt-shift, which really helped frame this view the right distance. 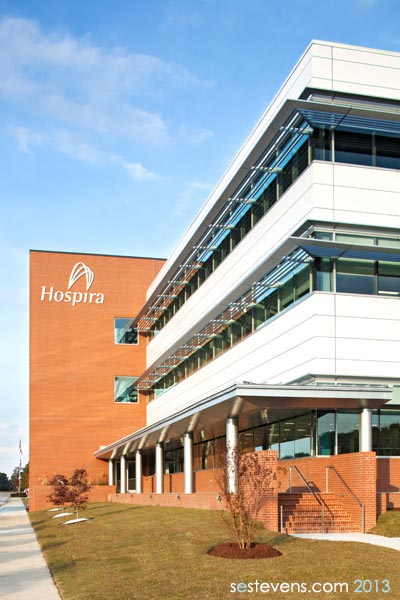 Every building is a little different.  I couldn’t capture this view in early afternoon because of the cloud cover but because of the harsh-glare of sunlight off the windows, a day shot during late afternoon proved impossible.  I did manage to pull off the view at blue-hour, which I initially thought would be the project’s “money shot”.  I was wrong about that. 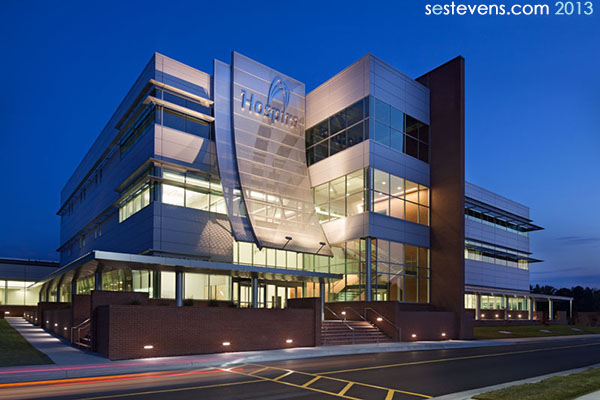 A few storms and almost a week later, the skies cleared up enough for a few morning interior shots.  As you can tell, there’s a lot of glass (and reflections to deal with) here.  I pulled down the shades of the windows to the right of me, turned on and off lights, and blended exposures together to cut it down.  Often mistaken for a fish-eye, the Canon 17mm tilt-shift doesn’t accept filters (so no circular polarizer with this image), but I should really take the time to rig something together sometime. 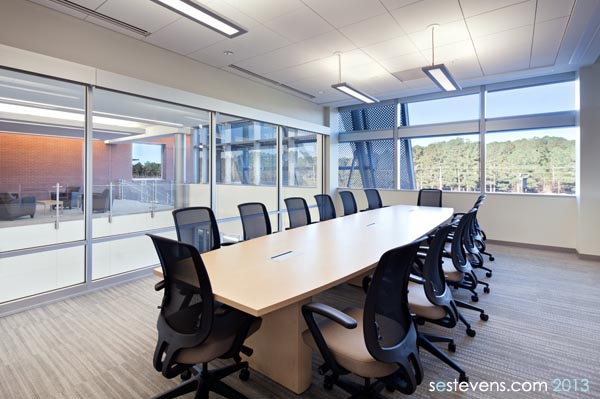 I implemented tungsten lighting to help balance some of the lighting both on top of and underneath the staircase. 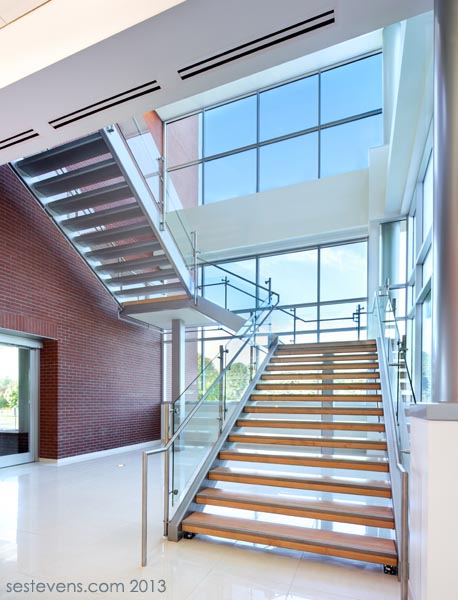 This view from the stair landing is a composite stitch of three images with a 17mm tilt-shift.  The furniture, which you’ll notice is in the same configuration as the lobby photograph above, is in a different location to make the photo read better – probably about 4 feet to the right and a little closer-than-comfort to the elevator.  I didn’t mind the reflections here, I thought it helped distract from the change in brick color. 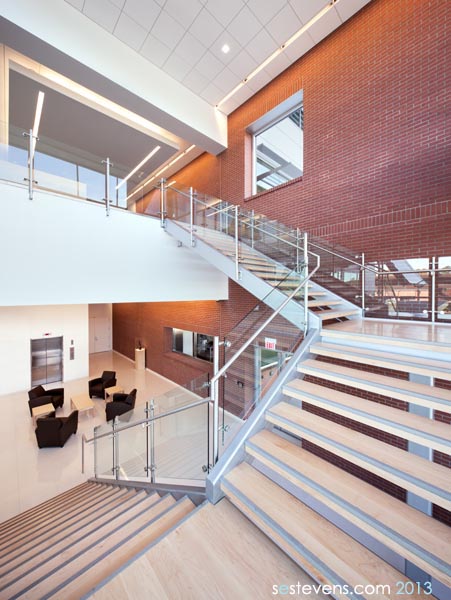 I didn’t like the way I captured this view the first day, so took advantage of the clear weather to get a shot earlier in the afternoon, carefully lining up the cast shadow from the shading devices between building elements.  I positioned myself a) as far to the right of the building as possible to avoid complicating the photograph with the curved metal signage yet still see there’s building beyond the wall b) so that the two trees fit cleanly into the picture without distracting from the architecture. 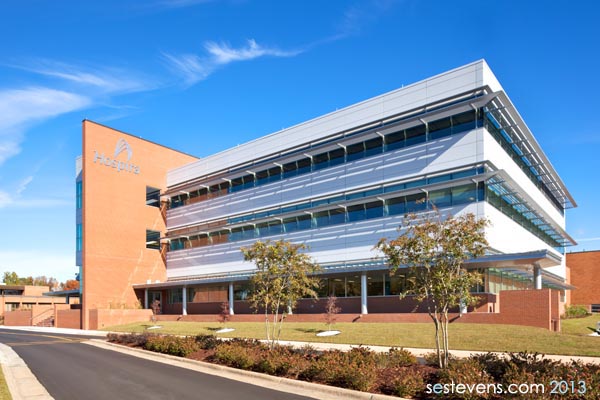 Here I’m playing with the scale of the sign/entry vs. the stair stack vs. the dividing wall.  It’s interesting how light/shadow, transparency/reflection alters how you perceive the exact same view.  During daylight (DAY TWO), it seems the staircase is sandwiched between two other masses, but at night (DAY ONE), the mass of the dividing wall appears to visually support and frame everything to the left of it. 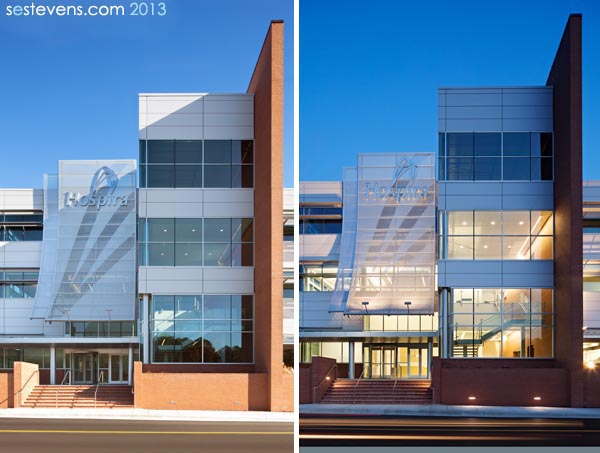 I never got a super-clean shot of this view, though I’m okay with the lack of sunlight.  I was surprised how much better this photographically reads during the day than night, and the looming mass of the canopy never loses its importance. 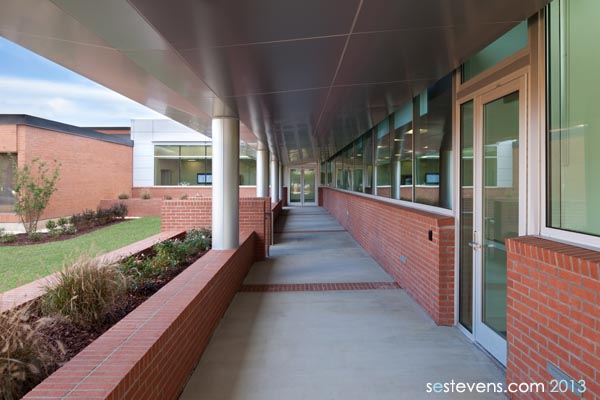 One-shot looking up at the Hospira signage.  Hey – not everything can (or should be) perfectly straight! 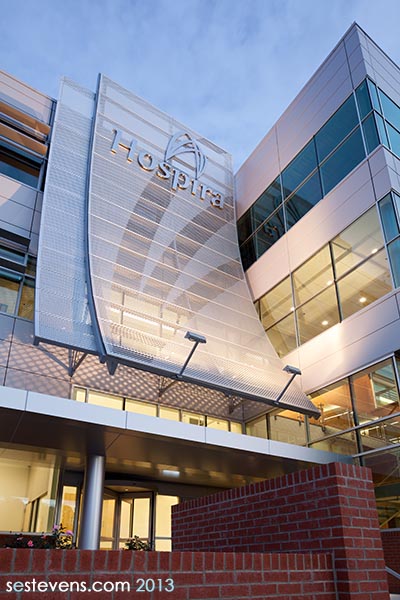 Sometimes you get lucky.  The only reason I stuck around was to shoot the perforated sign above, but observing what the clouds were doing to the sunlight, made an impromptu decision to sacrifice this photo for the sake of recapturing the money shot. (Besides, the entire building included the sign, the photo could just be cropped, right?) Winter skies are entirely unpredictable, they can be grey and gloomy or they can be colorful and spectacular.  As you can tell from the previous exterior photos the clear day was making way for clouds, providing a desired combination of factors for a dazzling purple sunset. Much of architectural photography is being patient for the right moment. I stood in place for the next ten minutes to wait for the sunset shot below. I did have to deal with bright reflections from the windows and position myself in a way to minimize the glare, so it’s at a slightly different angle than earlier night (and day) shots at this corner. 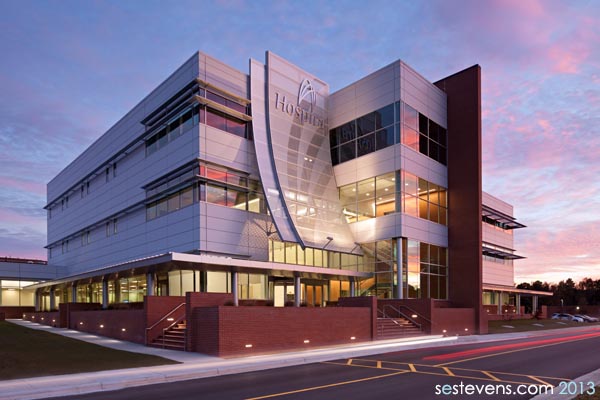 Glad I stuck around that evening.

The last couple of days were mop-up.  After returning from Pennsylvania that morning, I drove straight from Raleigh to Rocky Mount for this corridor view. Again – turning on and off lights is your friend.

Early the next morning, I wrapped up the shoot with two-capture stitched image of the main lobby from the second level. I drove directly from there to Richmond for another client.

And that’s how I’ve been rolling with the punches. Hope you enjoyed – you may notice I’ve been posting a LOT of blogs lately – well…that’s going to keep going until year’s end. See you soon!