Hello Texas! As those following closely know, I launched my TX-based architectural photography operation immediately preceding the pandemic. This winter commenced my first shoots and as the country slowly opened back up, I began regularly accepting assignments this spring as the world slowly opens back up. One of these projects I’ve been looking forward to for a couple of years now (really), the brand-spanking new Ford, Powell & Carson Architecture & Planning studio in downtown San Antonio, a 14,000 s.f. renovation in the historic Light building, a previously abandoned newspaper print facility.  Fans of my fine art career are familiar with my love for these types of facilities and this wonderful project fostered a perfect blend with my professional work.  The design marries elements of the original building with architectural features reflecting the company’s history and design aesthetic.

A renovation of this size has several points of entry, including two public spots at opposite ends of the building.  Portions of the existing mezzanine floor were removed to allow two-story spaces above.  Lit installations resembling clouds hover above the new openings down to the corner reception space below.  Series of wood panels form a ceiling below the building’s open-air plenum, navigating visitors’ eye down a series of strong axes that help divide space along with wood screen elements and patterned clay tile walls. 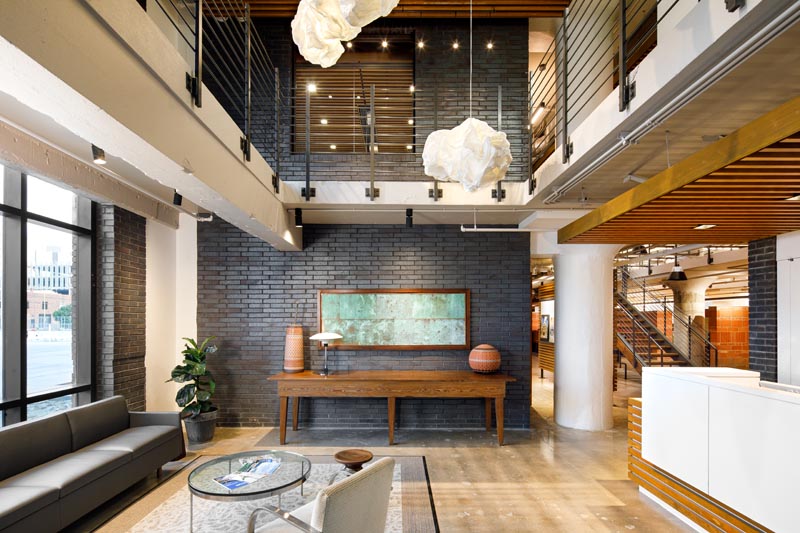 There’s a continued interplay between two and three dimensions throughout the studio, with material walls, drop ceilings and railings.  This layering functions to separate public from private, assists waymaking through these spaces, and is just plain fun mixing the old with new architecture. 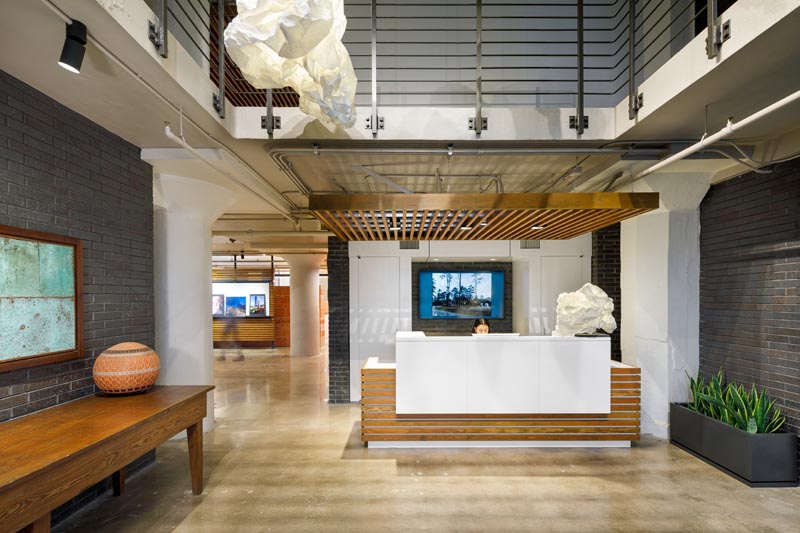 This play further factors in three-dimensions, both horizontally and vertically along the secondary axis (we’ll get to the primary axis in a bit) that narrows and expands its entire length, guided by display areas that screens smaller rooms, ductwork in the open plenum, the staircase and mezzanine above. 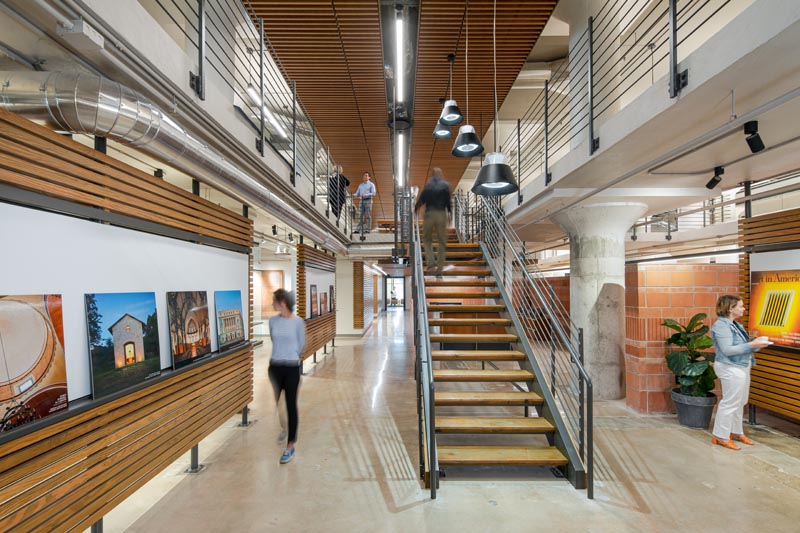 The layering of spaces is most appreciated laterally.  Below the wood panel displays align with the existing building columns, beyond to the next series of columns is the staircase with a workspace below, and beyond that is the clay tile wall that borders the open studio (carried beyond by the ceiling) 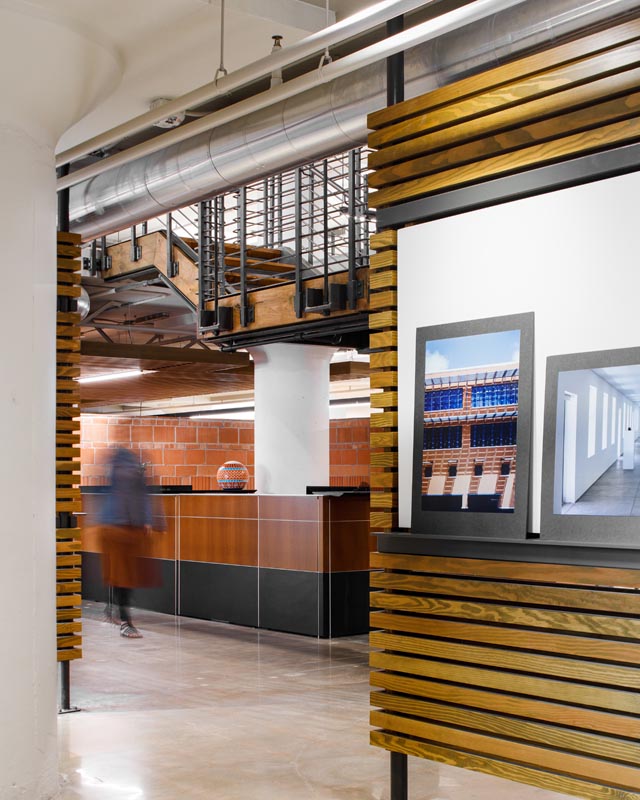 And what about those smaller rooms previously alluded?  The mezzanine was cut here to allow a tall ceiling for the conference room, with window above carrying the space beyond to the adjacent reception area.  Green plantings liven the space along the exterior wall. 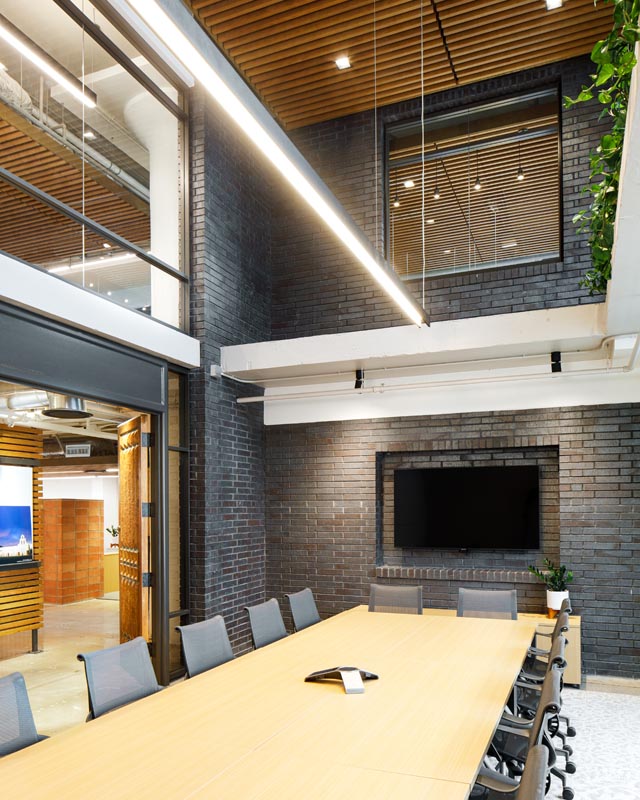 Adjacent to the large conference room is a smaller meeting room has a red feature wall and corner window where the path pinches at the concrete column.  Beyond is the break room, 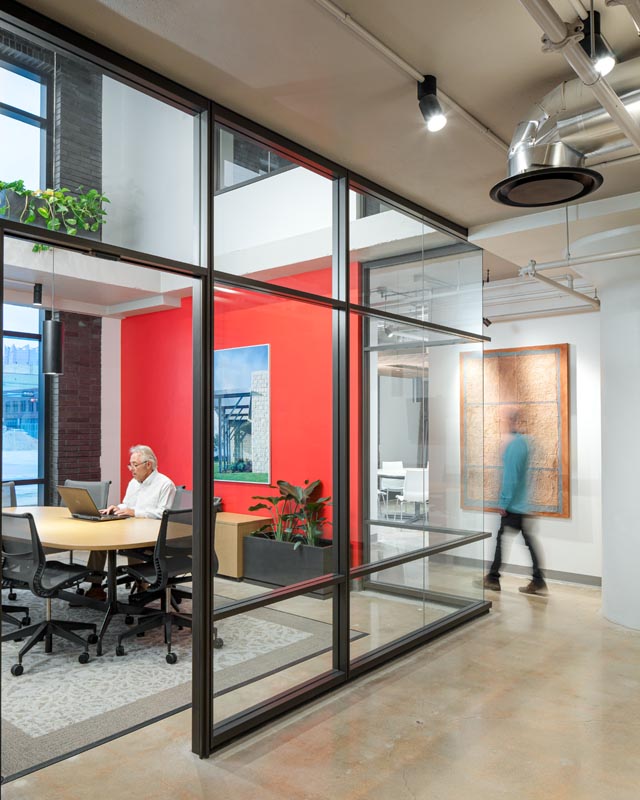 which is pretty cool.  Check out how all the defined lines carry from front to rear. 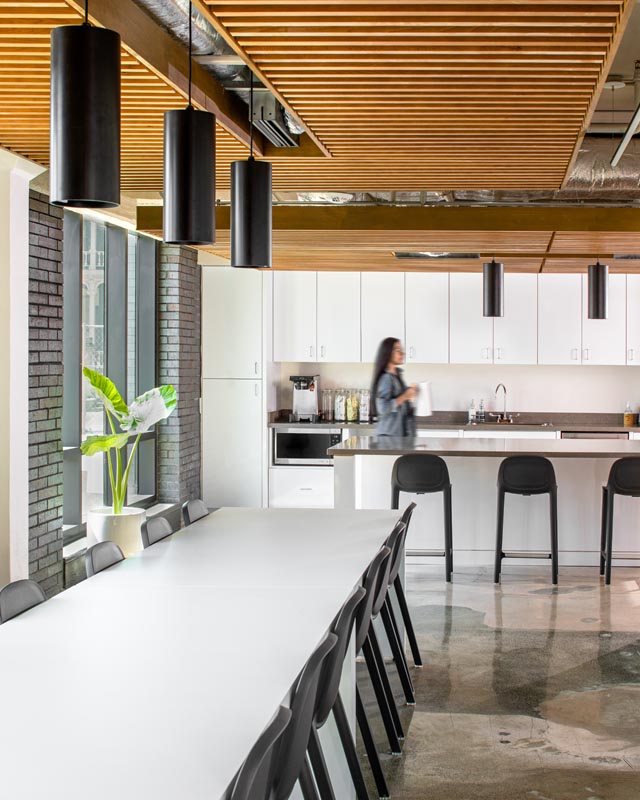 At the other public entry is a grand space that contains the library, more meeting rooms, and the firm’s library.  Check out that existing staircase with gorgeous tile pattern to the right! 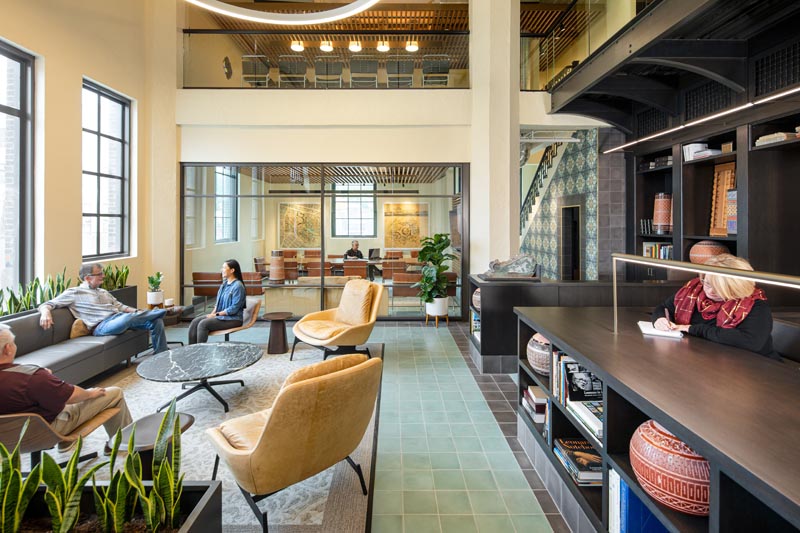 The shelves that form the library allows access to both secondary axis as described above and the main axis that forms the open architectural studio. 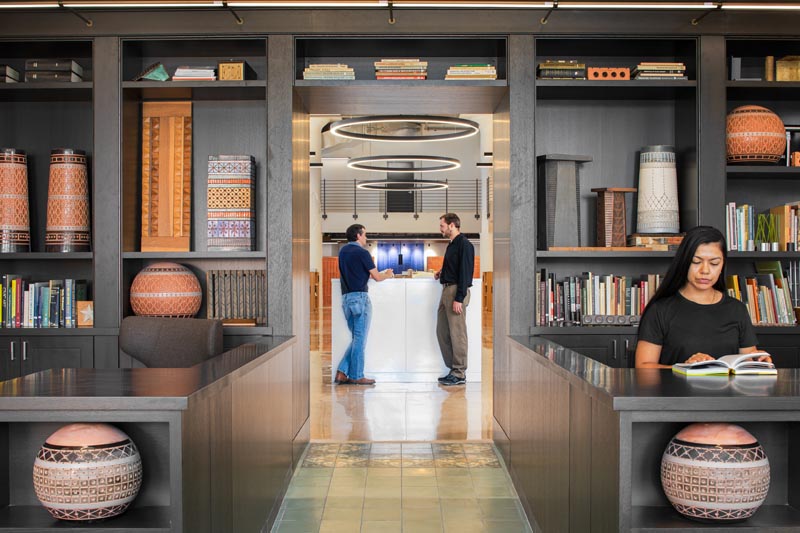 Large circular ceiling fixtures and fans follow the axis above, with metal drawing cabinets below.  A blueprint display reveals itself from beyond the termination of the half-wall below the mezzanine. 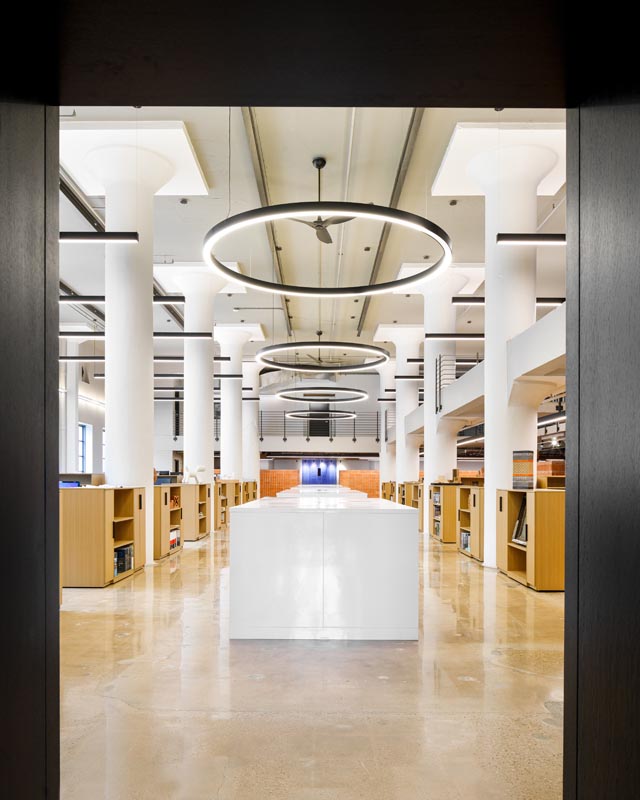 These stairs were something else.  Love the heavy, but modern industrial look.  Again, with the layering, you can see workspace below, small open-air meeting space that sits above the studio beyond. 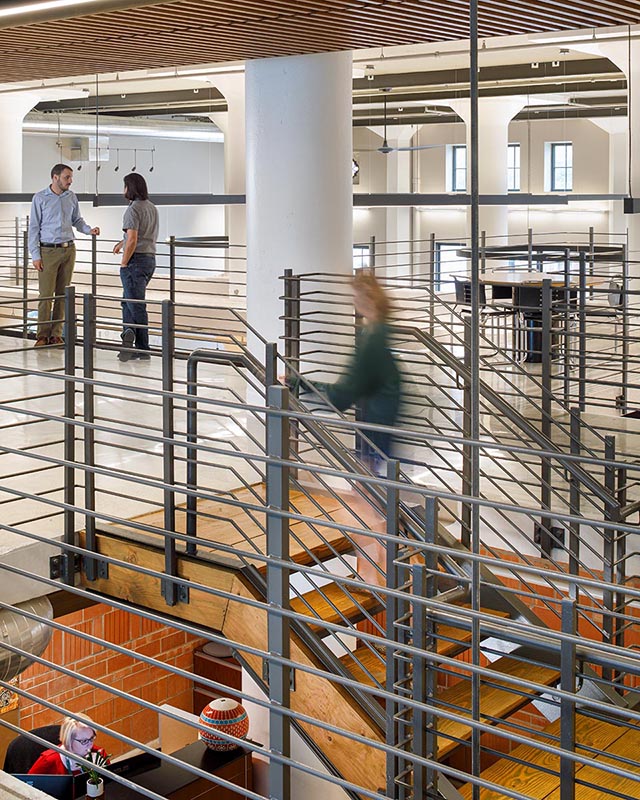 I really like how the architect made further opportunity of the mezzanine above with these meeting areas, adding to the synergy of the overall studio. 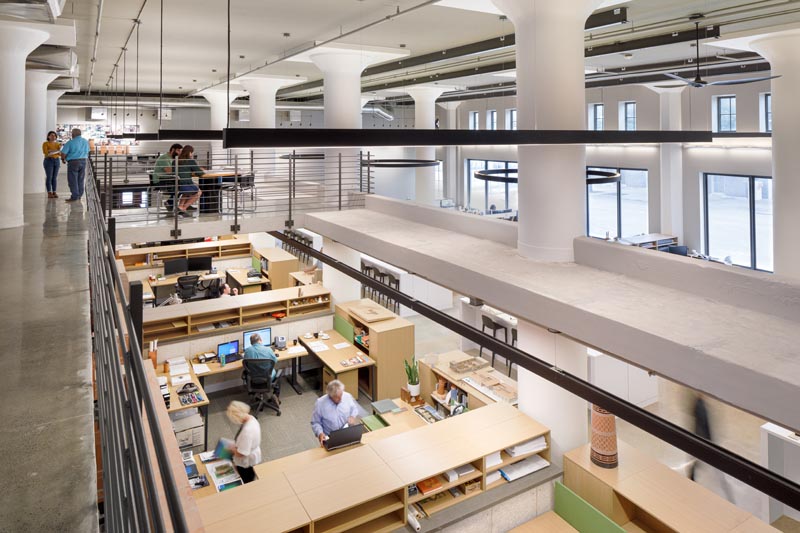 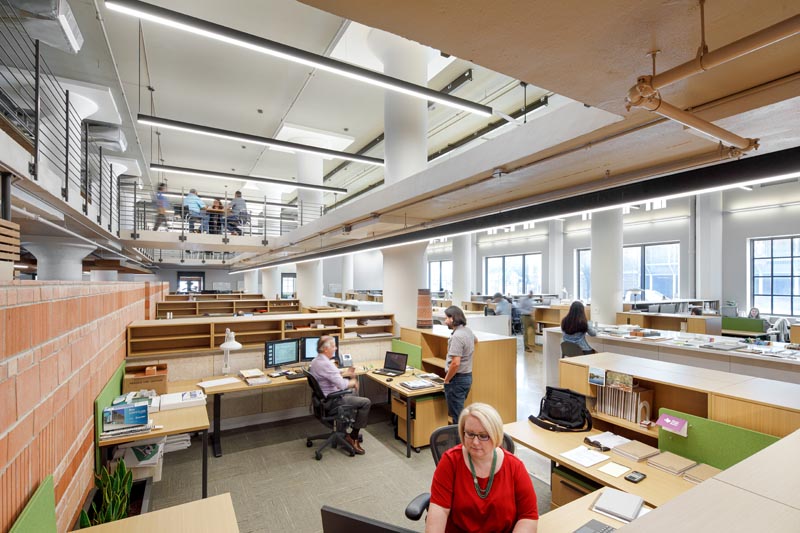 The most significant challenge, was illustrating the two-dimensional layering of space through three-dimensions.  It was fun to figure ways to communicate how the strong primary and secondary axes defined the program below in lengthy, horizontal spans. 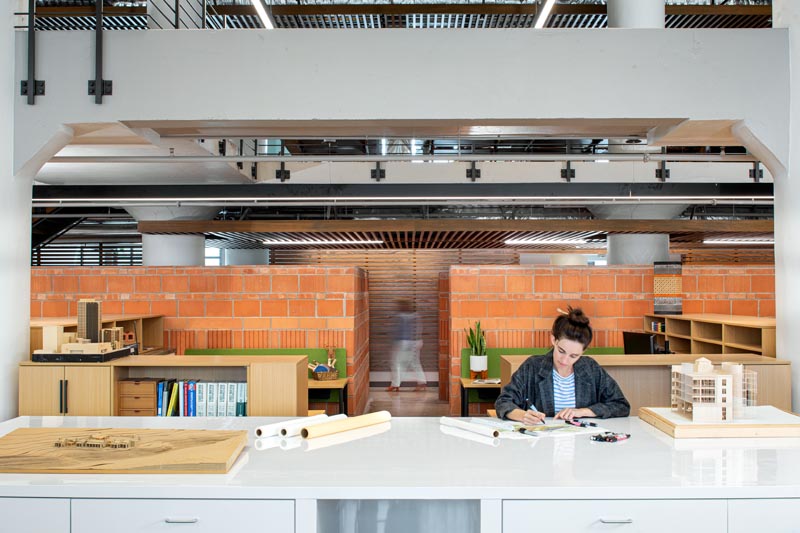 It’s been a great start in Texas and I’m looking forward to further opportunities to come!  With all sincerity, thanks for welcoming me with open arms.