A question posed by potential clients is “how do I work?” and the (true) answer is I cater my my approach to my client. I’ve purposefully chosen to collaborate a diversity of clients with varied design philosophies, visual representation, marketing strategies, of all sizes, regions and demographics. Some clients have very stringent, direct needs down to the exact view they want to replicate, others wouldn’t know where to begin, and most fall somewhere between.

Architectural photography of the Charlotte Convention Center commenced last October and wrapped up in February, captured in two stages.  Clients involved with the shoot was TVS Design, the Charlotte Regional Visitors Authority (CRVA), and Holder Construction.  The planned shot list included certain exterior points of views and coordinating vantage points from adjacent buildings.  Navigating foliage with full leaves was a challenge, so in February I returned to capture the overall convention center, illustrating the east-west addition (to the right below), with pedestrian bridge that saddles adjacent to Charlotte’s light-rail system.  The rhythm and longitudinal massing of the $127M addition seems to balance out the existing pillars carrying the roof canopy extending over the west facade. 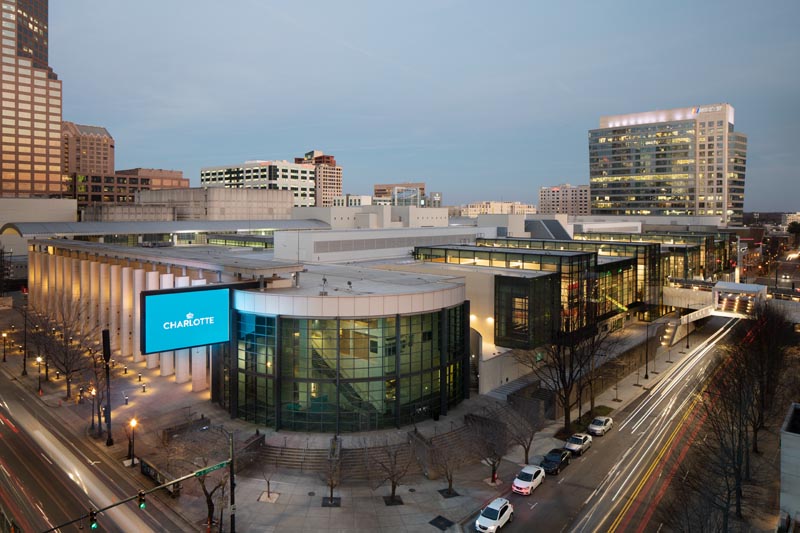 Illustrating big-box architecture like this requires showing how it molds itself not only to the existing building, but integrates within city infrastructure and surrounding urban fabric. 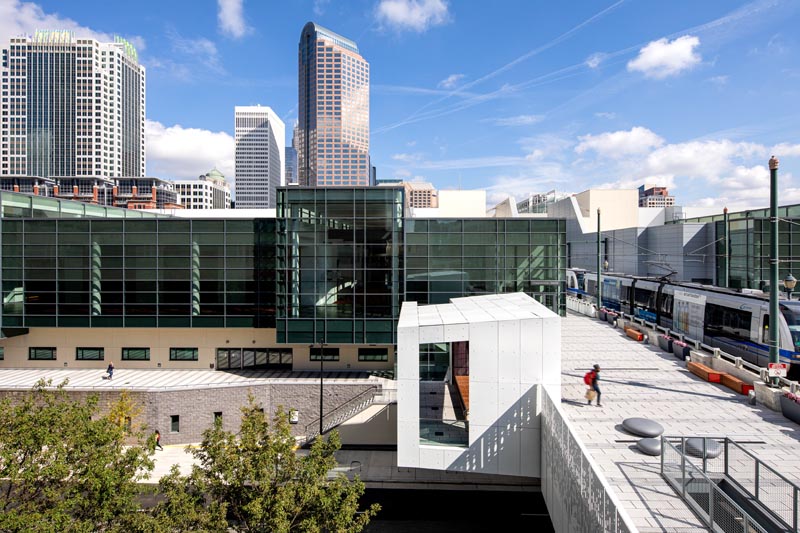 What a difference between translucency and transparency as the glass envelope that forms the addition’s massing during day allow deep views into the convention center at night. 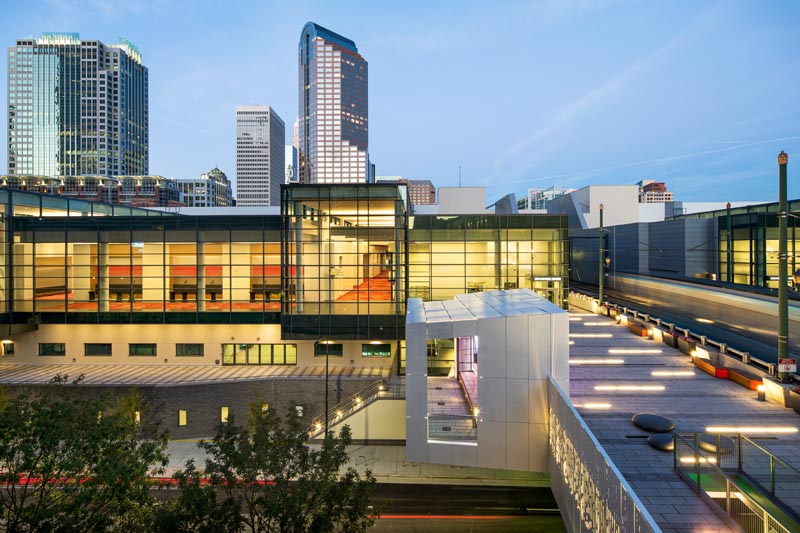 Under construction in the adjacent block is the new Duke Energy Plaza, where the utility company’s headquarters will relocate from the iconic Duke Energy Center…where they moved to in 2010.  I guess they just like swapping skyscrapers every dozen years or so. 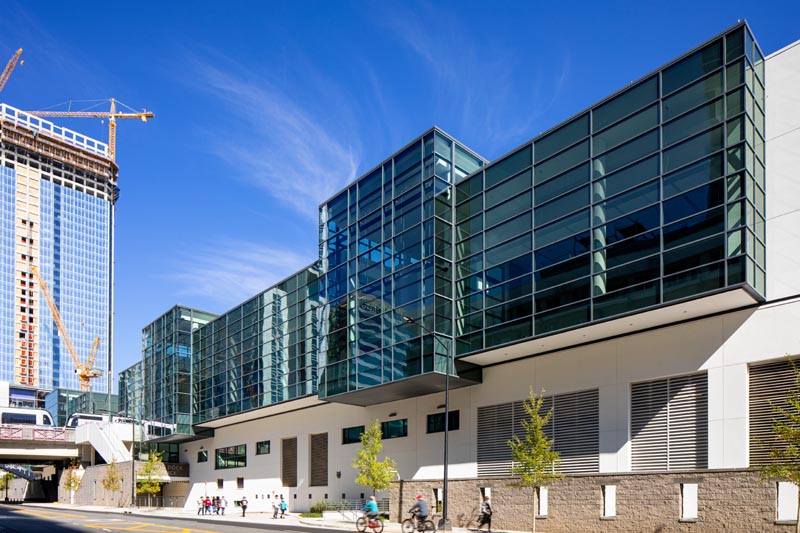 Decorative stairs allows direct pedestrian access from the street level to light rail platform.  This was one of the exterior shots I added myself, as the massing and colors seemed to match the speed of traffic below.  There’s a lot of opinions on color balance for exteriors and I prefer to individually make that call for each project separately.  For this shoot, I decided the warm colors resulting from matching the entire image to the outside worked well. 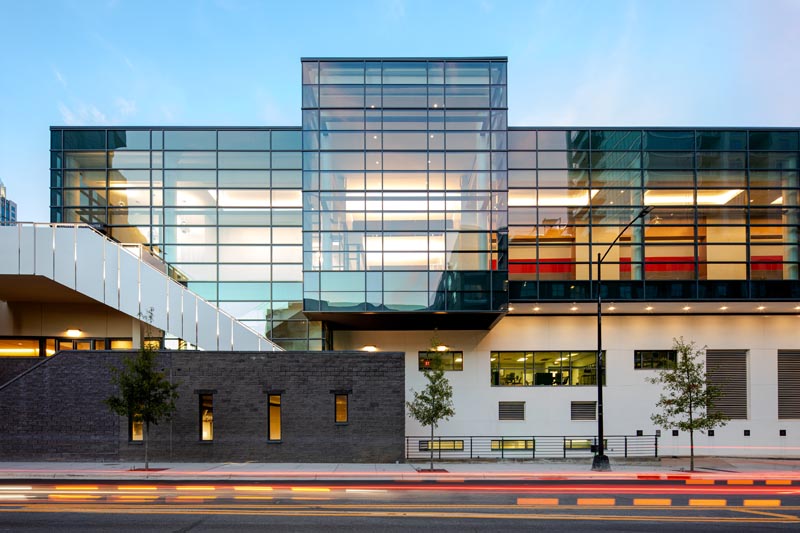 That pedestrian bridge is insane isn’t it? 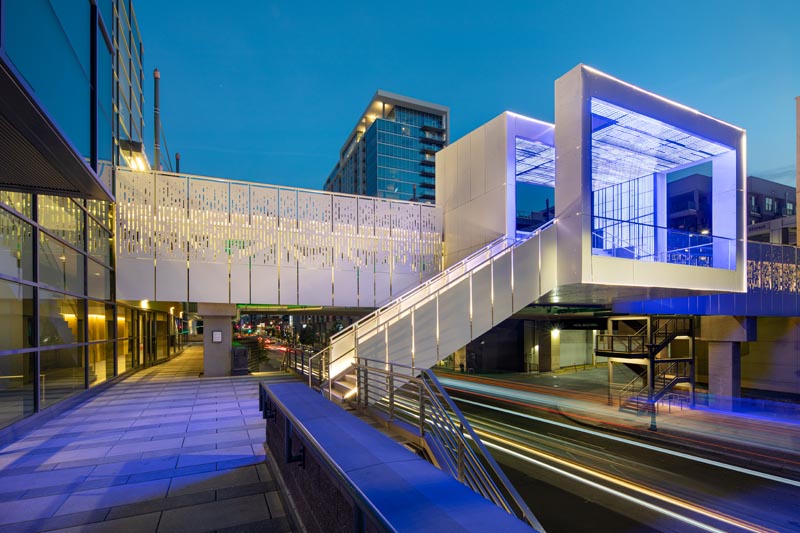 Practically it provides shelter for anyone grabbing shade or ducking the rain waiting for the light rail, can serve as an informal meeting spot in uptown Charlotte, but also adds a funky new, probably Instagrammable landmark to the Queen City with some awesome views of the city. 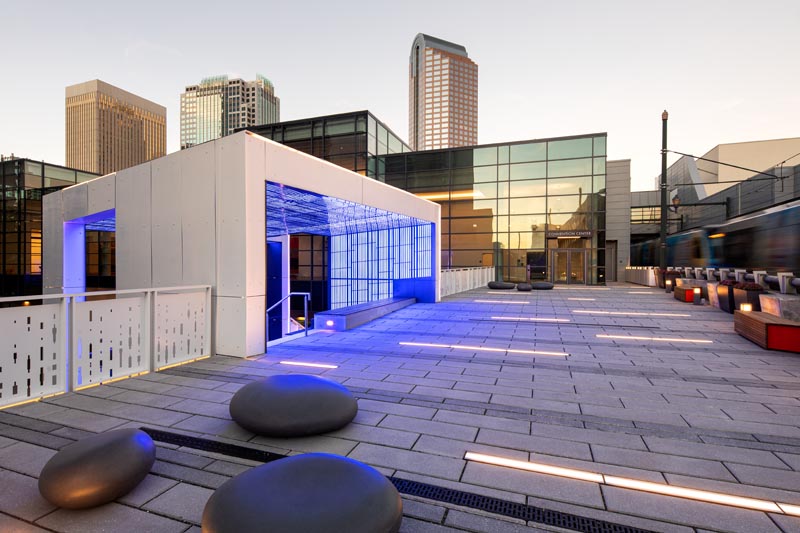 Here the adjustable LED lighting reflects hometown NFL football team Carolina Panthers as a young man visiting from out of town takes a break relaxes from scooting around the city. 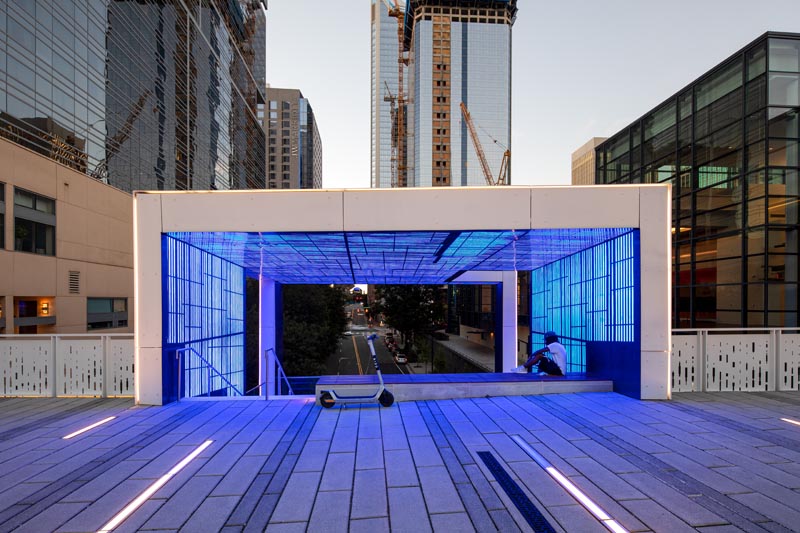 Though I had renderings and site photos from CRVA, between two phases of the project, I took advantage of driving through Charlotte to take a critical look at the interiors and completely map out the shot list myself.  Immediately, I recognized several things: 1) scale and visual connection, relating interior and towards the exterior would be key 2) south-facing, light and shadow would be critical and we couldn’t merely do this on a cloudy day and 3) we needed people and other objects for scale.  As you can tell, it wasn’t a flawlessly sunny day, it was variably cloudy, which can be challenging but can provide some dramatic results.  We had to push quickly to achieve certain shots off as we dealt with some very narrow windows, but made it work.  Below are images from the West wing addition. 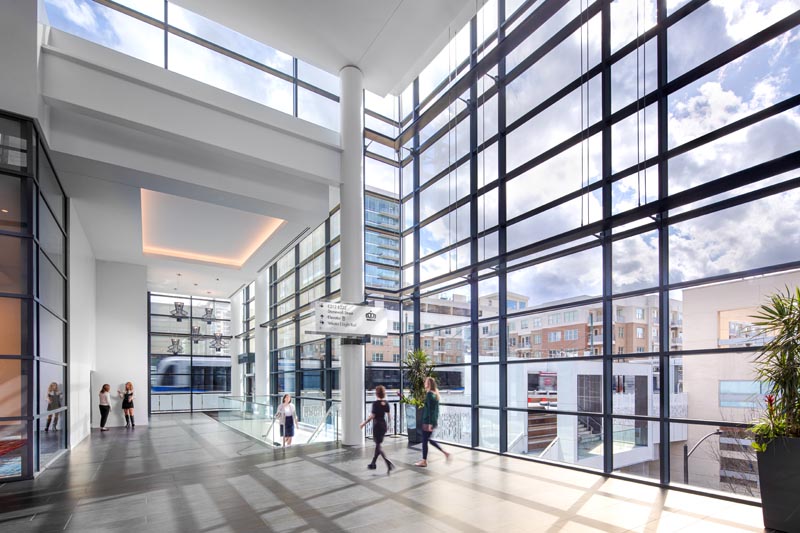 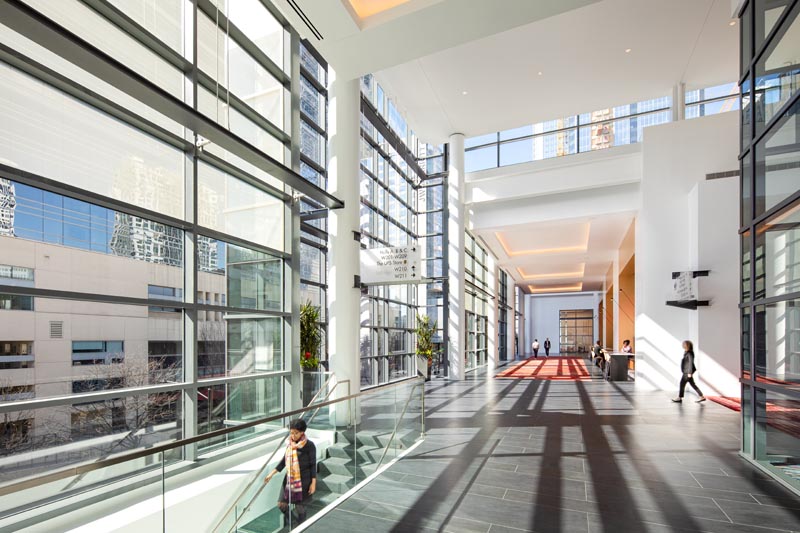 On other occasions we took advantage of the sun dipping behind the clouds for diffuse lighting in the corridors, which of course brings out the colors and textures much more.  TVS custom designed the carpeting throughout the addition. 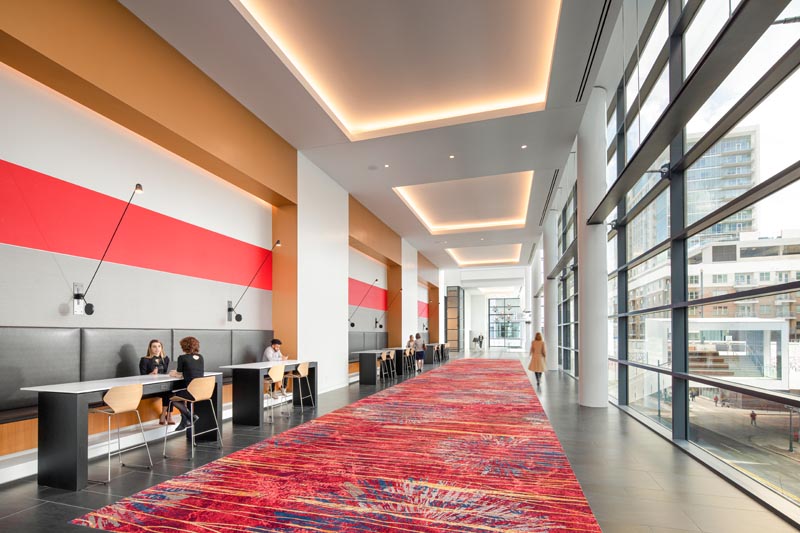 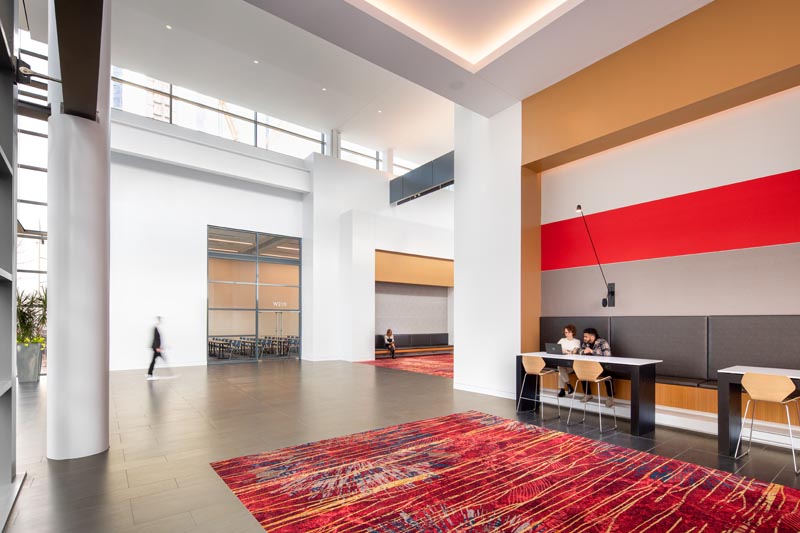 Not all spaces need to be insanely busy to illustrate scale.  Here, my assistant doubles to provide human scale by himself between the west wing corridor and end conference room. 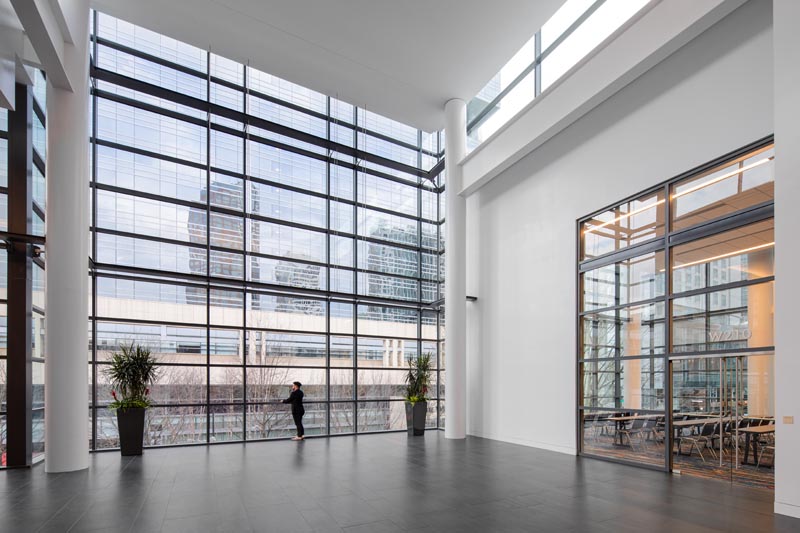 The east and west wings are connected by stairs and elevators on the platform level of the convention center that leads outside to the light rail station. 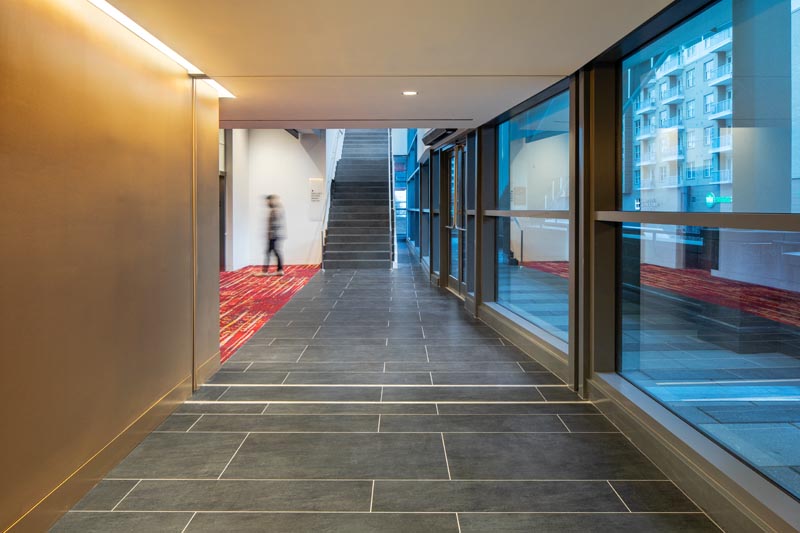 As the addition jumps the tracks from west to east, the building mass angles in towards the renovation’s end, therefore the East wing corridors are much narrower than the west.  To recognize this slight difference despite an almost mirrored building design, opted to shoot this wing (mostly) vertically, whereas the West was photographed (mostly) horizontally.  That “slight” difference turned out to be major in terms of visual communication and representing both sides of the addition.

Again, we used light and shadow to our advantage, adding dynamism, energy and warmth to the imagery. 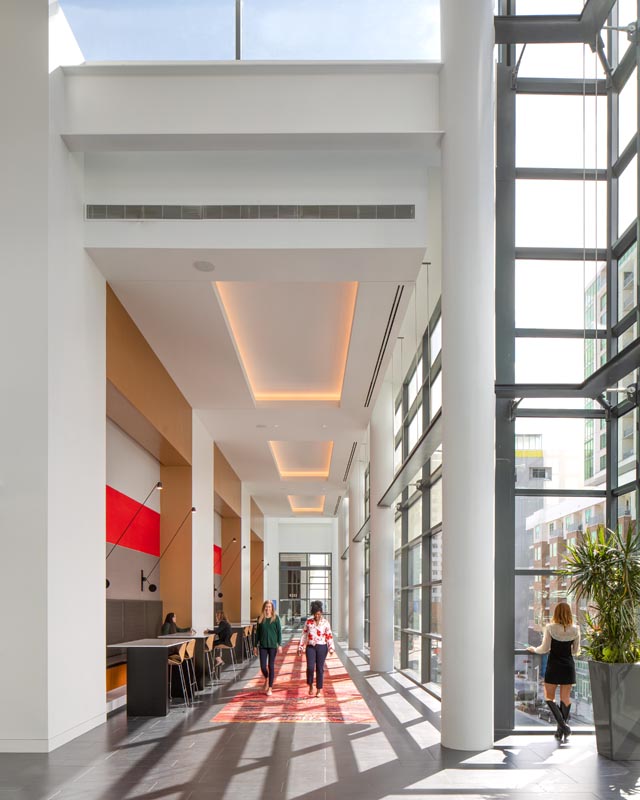 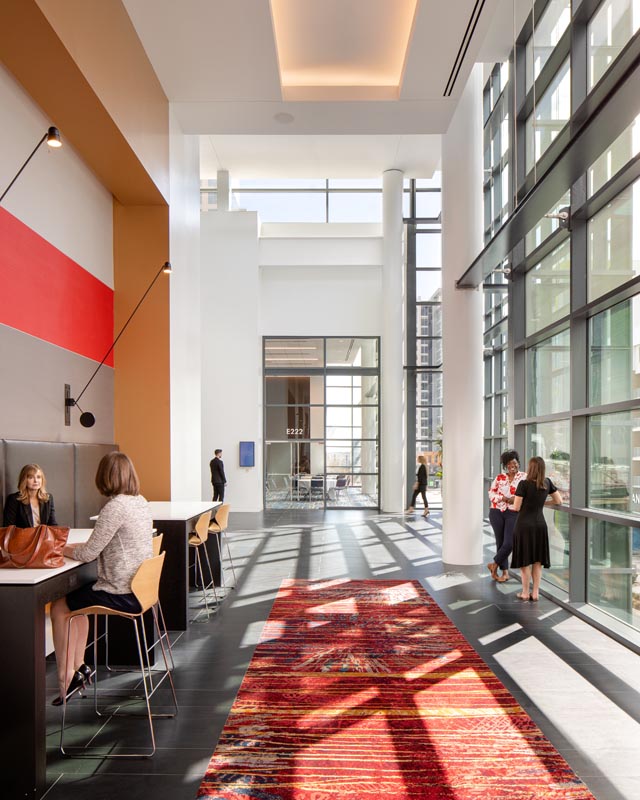 On other occasions, we went the diffuse route, particularly narrow corridors leading further into the convention center, letting skylights and clerestories do the heavy work. 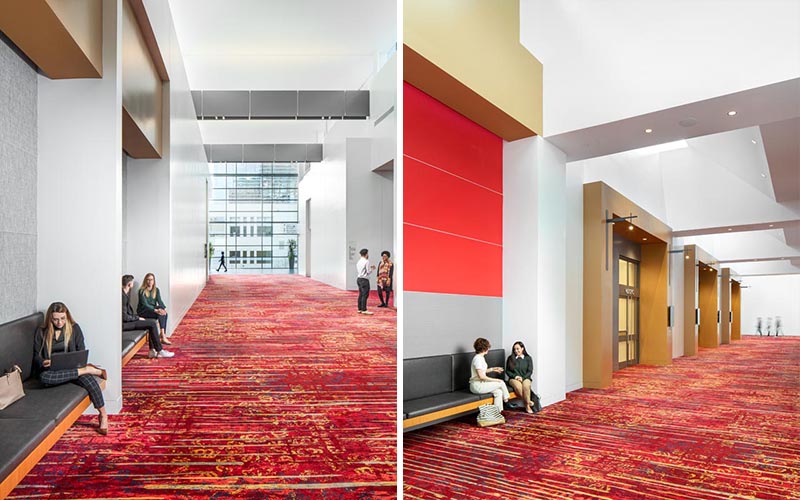 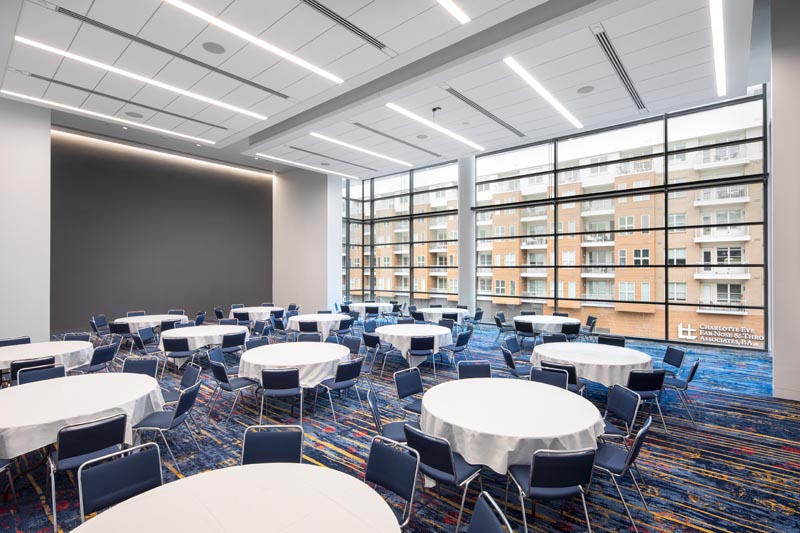 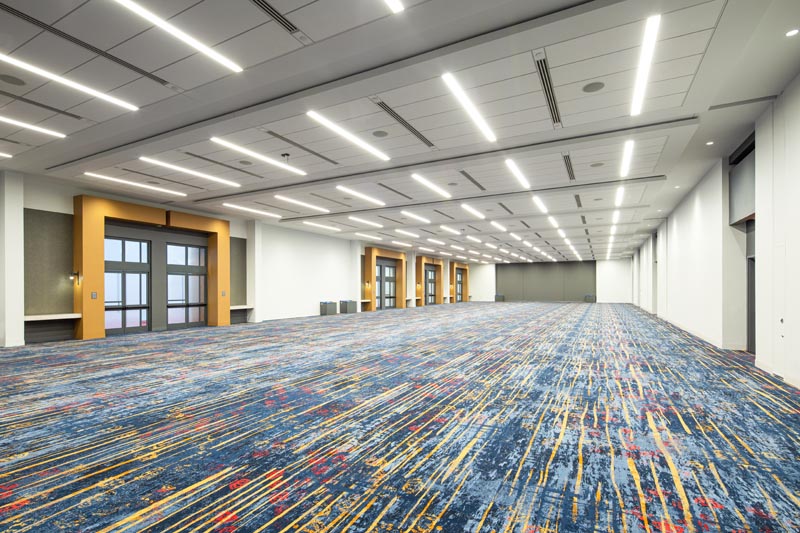 Alright, that’s wraps it up for the Charlotte Convention Center!  Wanted to thank everyone for their coordination, especially the patient staff of CRVA, Marc Hirsch with TVS, the staff of Westin Charlotte and J.W. Marriott.

Onto the next shoot, let’s go! 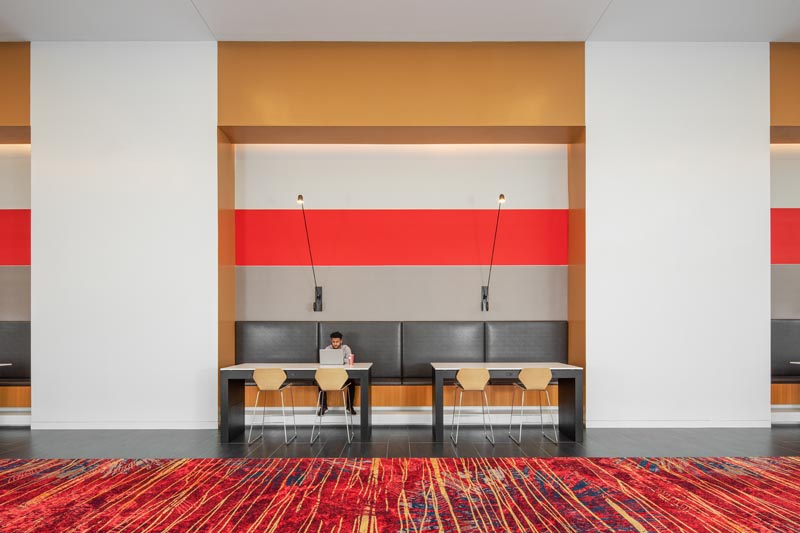