January is in the books, football season is over, and I’ve got another residential blog up! This time the house is located in Charlotte, North Carolina. First, let’s roll the credits: 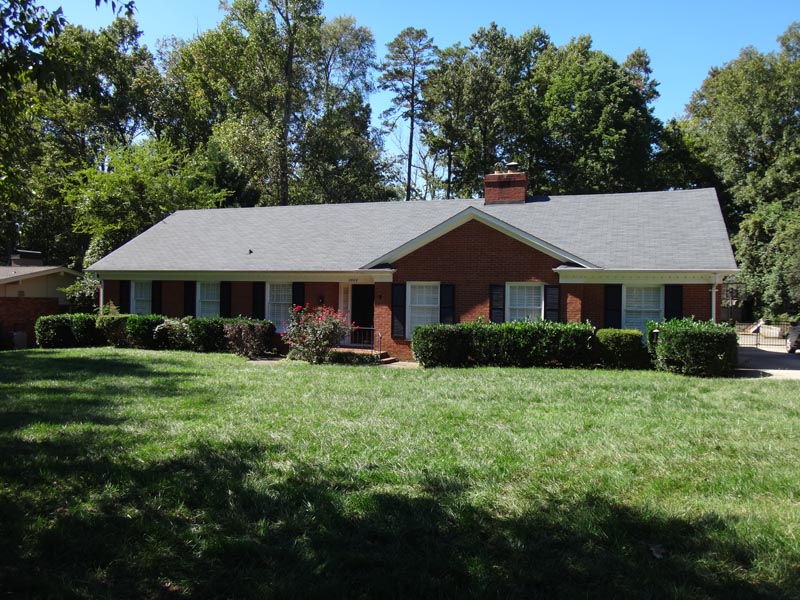 By the time I got there for the architectural photography, the house looked like this.  Anyone can clearly tell the difference between what’s being presented – the image above was taken in the summer, while the picture below was obviously taken during the dead of winter. 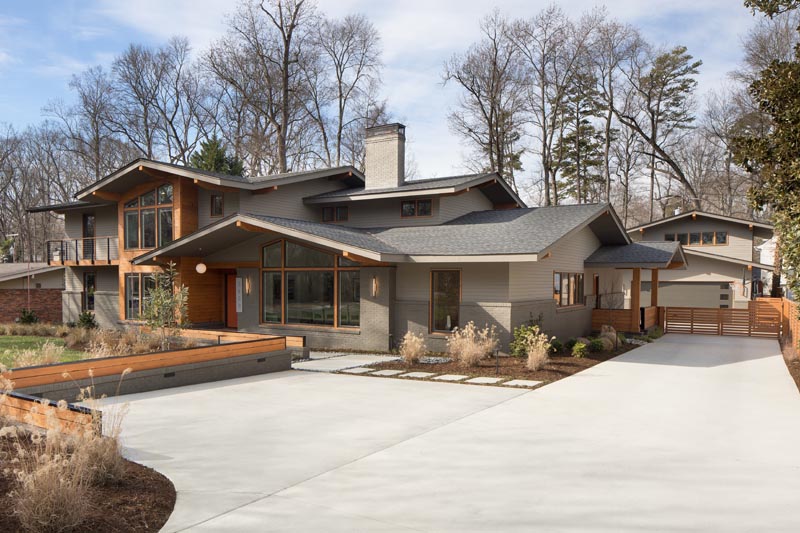 The interior revolves around the new two-story space that forms the renovated living room.  The kitchen, dining, living/entertainment and private spaces are all physically and visually accessible from this spot.  Clerestories above and generous windows below allow indirect light to filter in.  Nipping the corner of the photo is an art installation.  The interior colors really work here, right? 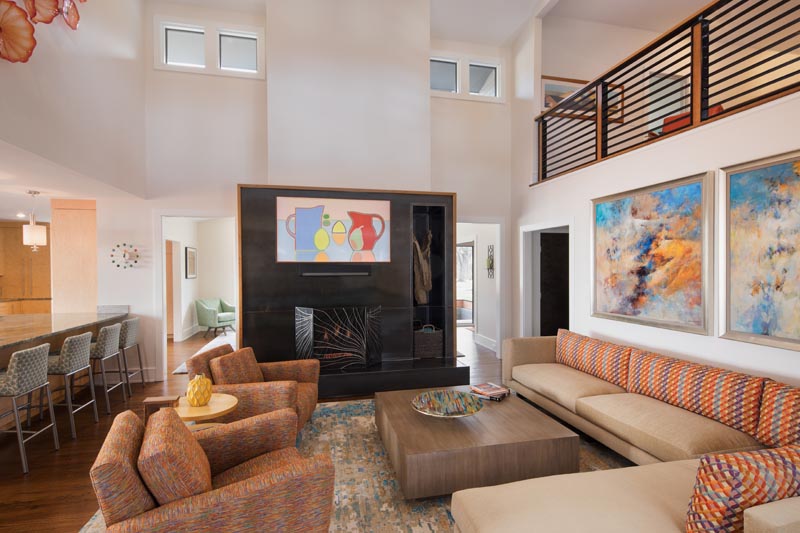 You know what I liked most about this kitchen?  I had plenty of space for my photographic lights, that doesn’t happen all the time.  The design’s pretty good too. 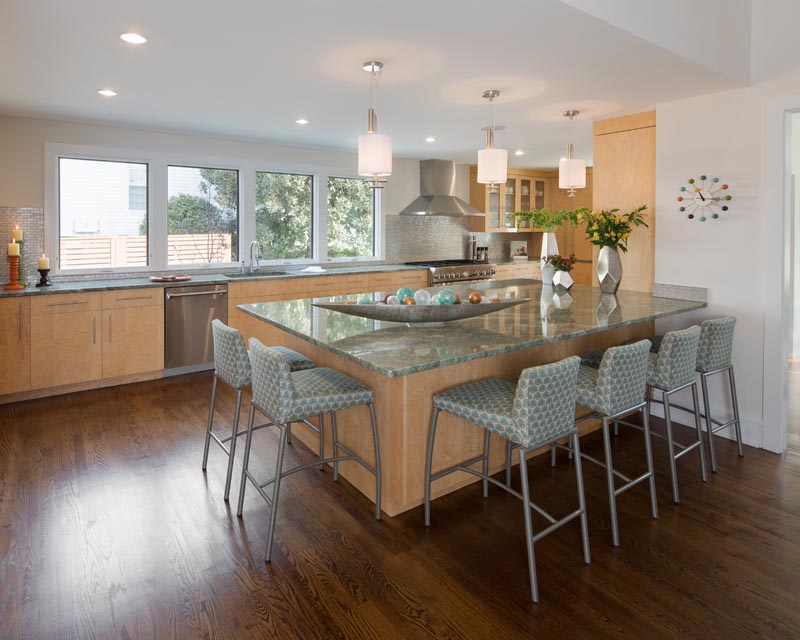 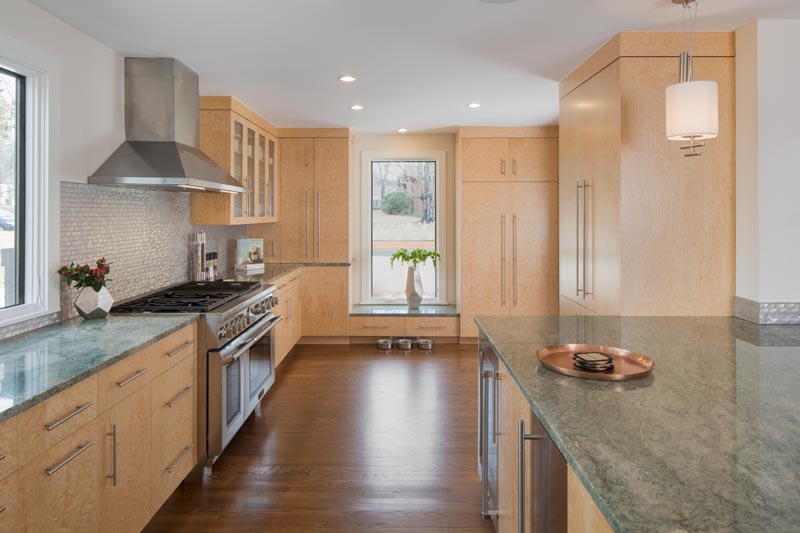 The office is directly adjacent to the house entry and that nifty orange door.  I mention the office 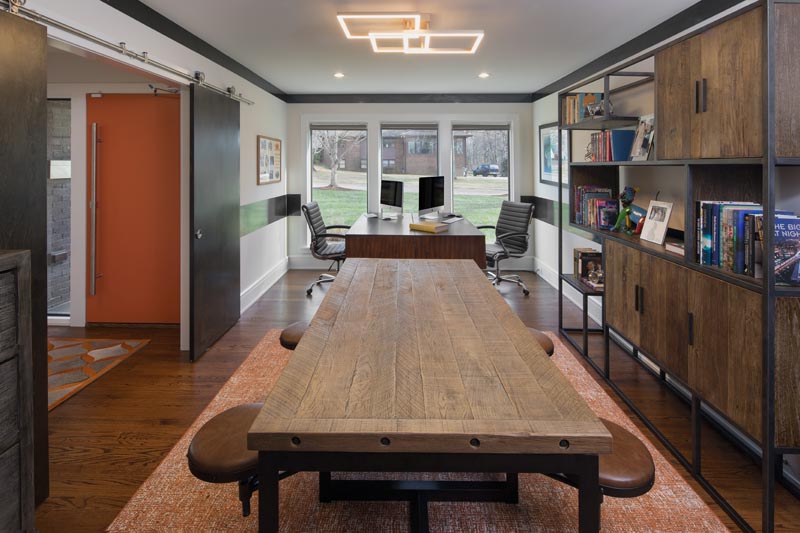 mostly to explain the layered view passing from the office, through the entry, the dining, all the way back to the kitchen. 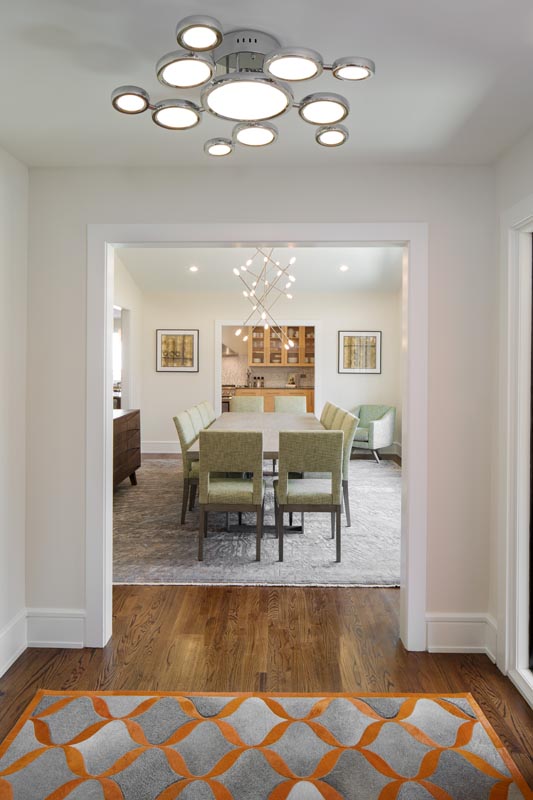 The overarching element I appreciated about this particular house was the design consistency between inside and outside of the house, from large aesthetic choices as the form of the house and spaces carved from it, to the landscaping choices, down to the furnishings selection and tasteful art.  It’s not a simple task to achieve with so many design parties. 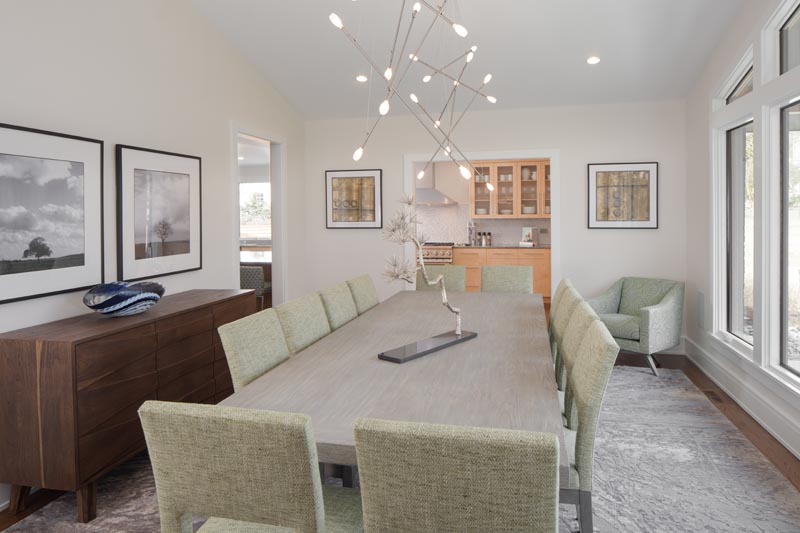 As you gather up the stairs to the loft, a bookcase shows off part of the family’s Lego collection.  There are -plenty- of these toys on display throughout the house. 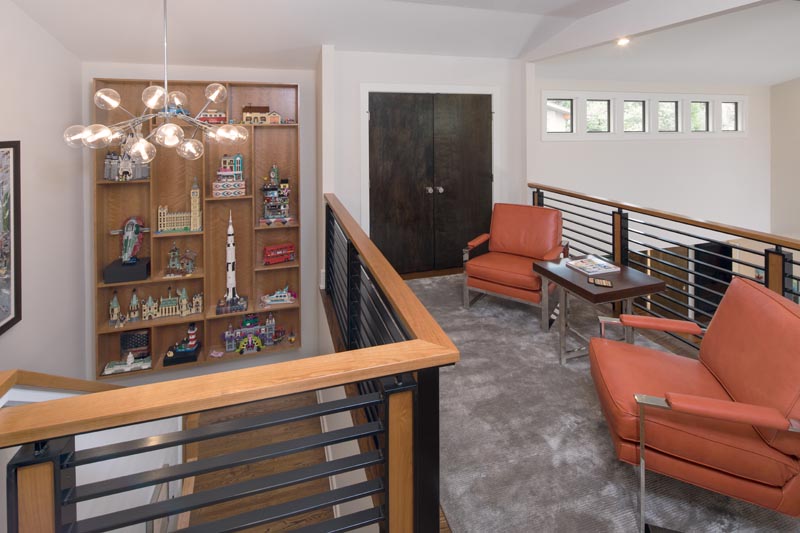 From the loft you can see more of the art installation, as well as the living room, kitchen, breakfast nook and mud room below. 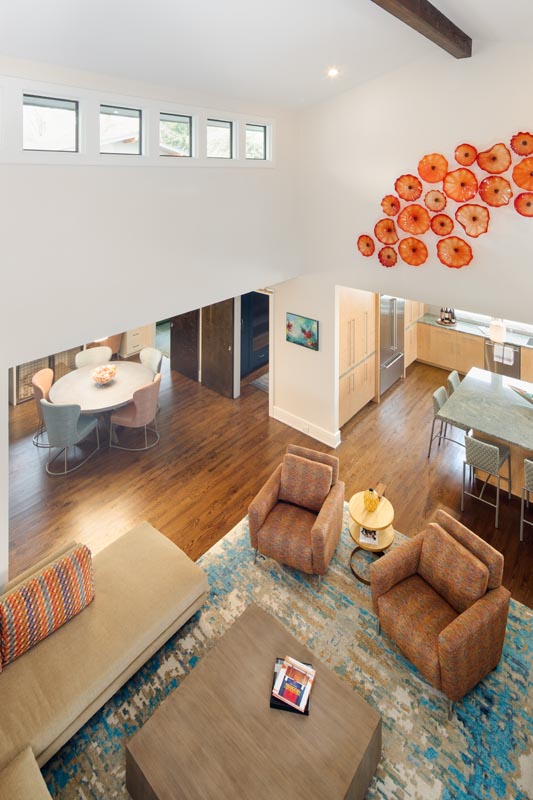 Wrapping up interiors, below is the master bedroom and one of the children’s bed and bath. 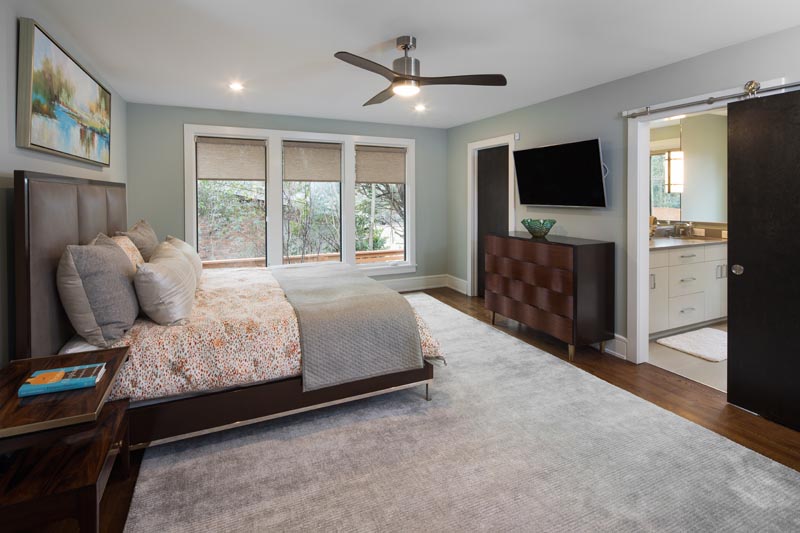 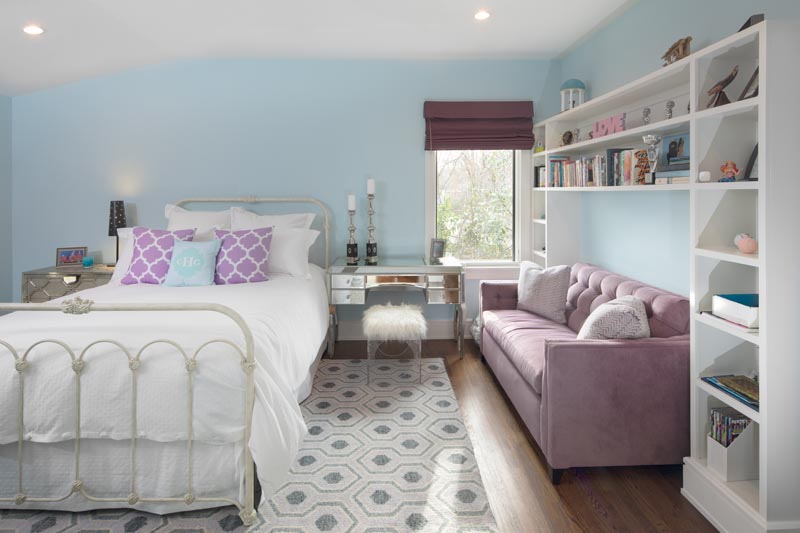 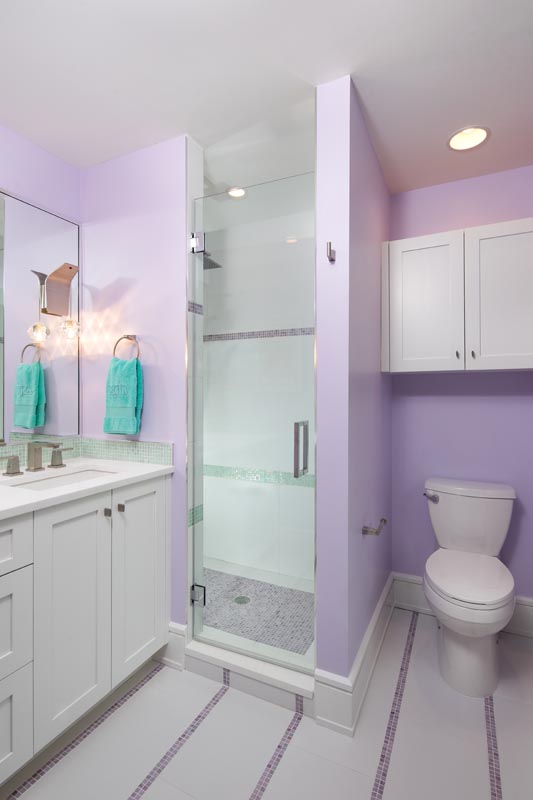 The new covered porch with skylights bridges between the master bedroom and breakfast nook, leading to the backyard behind the house. 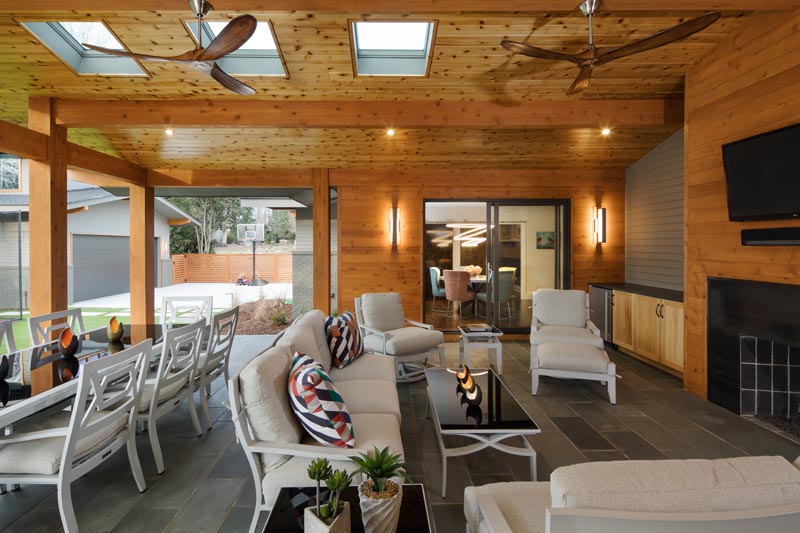 As much as an architectural photographer plans for weather, it’s never predictable no matter the forecast.  Ever.  The beginning of the day was sunny but skies began to cloud over in the early afternoon.  This required me to capture evening shots well before traditional sunset, balancing between the lit interiors and cloudy sky.  My task is to make it work and grey still functions fine in winter, especially with modern houses.  The meteorologists would forecast snowfall in North Carolina for the following day when I’d return to Raleigh.  As anyone in the South knows, forecast of a few inches of snow could mean anywhere between nothing and 2 feet.  If it snowed – and we were all skeptical it actually would – I offered to take a couple shots before leaving Charlotte.  One just doesn’t get that many opportunities in this part of the country. 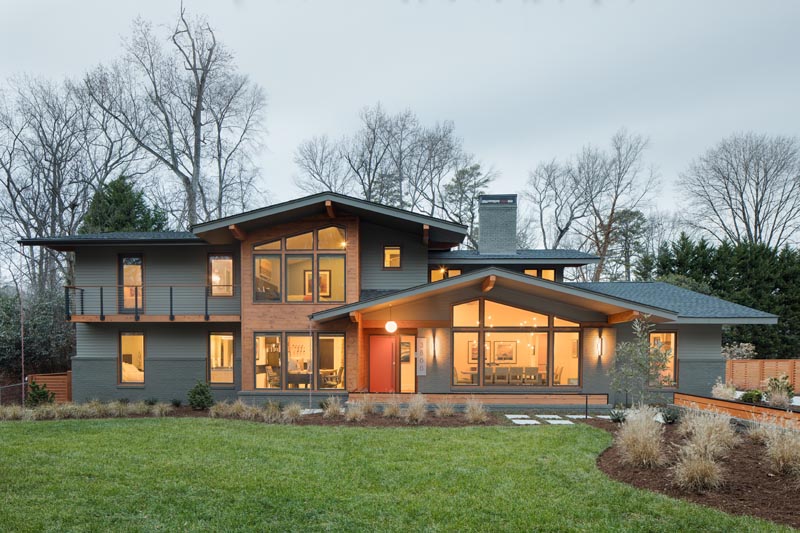 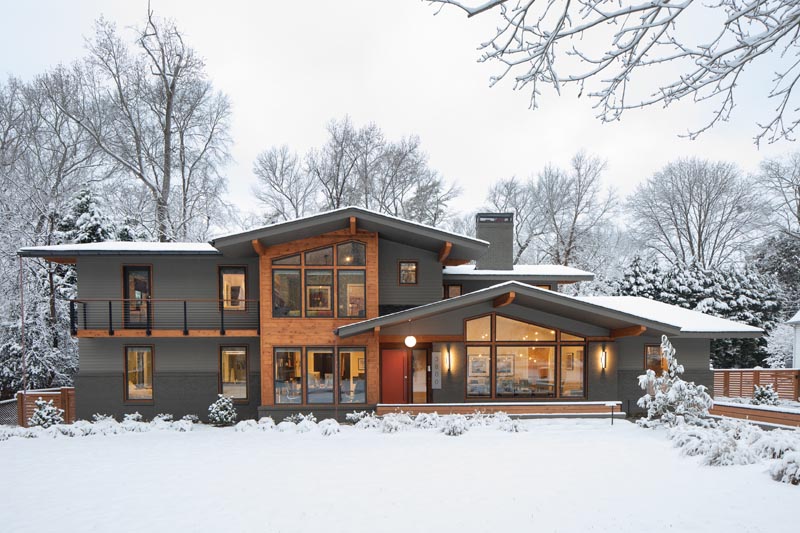 So I went to work.  The snow went longer than anticipated and it was still precipitating while taking these shots.  To avoid snow becoming too apparent in the picture, I strapped on a neutral-density filter and dragged the shutter speed and to prevent snow on the lens, sheltered it with an oversized golf umbrella.  It’s may be a digital world, but low-tech still works and photography is still photography. 🙂 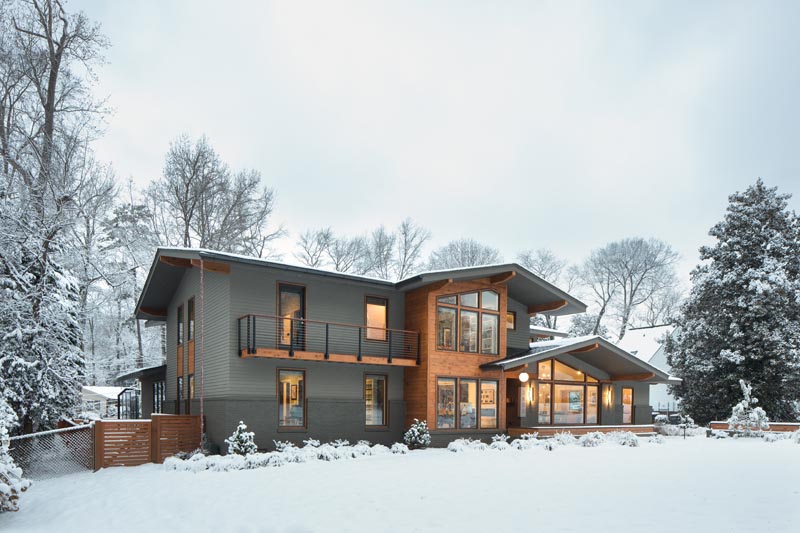 The colors work spectacularly well among a sea of white.  After wrapping up the snow day photos, I exuberantly threw both arms up in the air like Rocky then traveled home.

Wanna see more before and after comparisons between the former house and new renovation? Check out Studio XIV’s Facebook page.