I’m really close with my father, a part of my life I increasingly appreciate and treasure with age. The photo below, captured when I was age four, exemplifies that relationship, particularly in my early years. I’m cheesing it up for the camera so badly that you can’t even see Dad behind my fro, right? That’s the way he liked it – me in the foreground, he in the background. 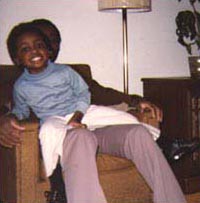 Both Mom and Dad worked their asses off to provide the opportunity that every parent wishes for their children – a better, more successful life than they experienced. Dad had a 90 minute one-way commute to work in north Jersey. Sometimes I’d wake up early enough to see him shuffle out and he’d usually return home a couple hours after Mom and I finished dinner. He even tried to balance a young family and work with attending graduate school at night, a goal that eventually proved too strenuous to complete. I have many memories of Dad, still fully clothed, sprawled face-down on the bed, deeply snoring. He did all this so we had the financial flexibility for Mom to stay at home to raise me. Dad often expresses regret over missing certain parts of my childhood, but I always reiterate that I never felt he was gone. He was ALWAYS unconditionally there whenever I needed him, no matter how busy or stressed he might’ve been. Further he never took out how much he worked out on me or my mother.

I was a very demonstrative and emotional child, prone to temper tantrums – you pretty much knew what I was thinking or feeling at all times (see pic above). My father seemed to grasp that my talents and the creative personality that came with it distinctly different from he and my mother’s. They’re not quite sure where it all came from, if I was accidentally swapped at the hospital or what the deal was. I always had to act independently and break rules, even if that meant I’d face punishment later. Even as early as four years old, I was proving to be a complete wise-ass, much to the consternation of my parents at future PTA meetings. It got to the point that my parents referred to “that mouth of yours” as a completely separate entity. Yet I always delivered with a large dimpled smile and it was always a game to get my parents to react to things they shouldn’t be laughing at, especially in public. Mom always shook her head (still does), groaning, “You think you’re funny don’t you, Sterling”, but Dad’s body would shake stifling laughter as he promised, “You know you’re getting spanked when we get home.” Yet despite dealing with a child who inherently didn’t like to be told what to do or how to do it, their incredible patience and dignity typically kept me in line.

Typically. To give you a sense of what my parents were dealing with, the snapshot below was taken at Los Angeles Airport in 1981. I’ve clearly had a good time at Disneyland as exemplified by the cowboy hat with “Mickey Mouse” logo stitched on the front. I’m fairly certain I’m photobombing my own picture here. A few minutes after this was taken, I curiously pushed on the terminal gate door that was to the left of the image. I wound up setting off the security alarms in the ENTIRE terminal. With all of the passengers, airline personal and security looking at me all I could muster was “Uh…oops.”

Yet another proud moment for my folks.

Instead of trying to contain my personality, Dad allowed me to be who I was, even if he didn’t quite understand the things I pursued or created. He’d continuously push me to the forefront while quietly supporting and encouraging me in the background. I’ve always wanted a career in the arts since I was a kid. At the age of five I told my parents I wanted to be an artist and at the age of 10 informed then I wanted to become an architect. Here I am, almost three decades later doing exactly what I love to do and I realized that when you tell your folks something like that, you might as well tell them you’ve decided to join a rock band or become a circus carnie. It occurred to me that my mother and father never pushed me to do something more ‘practical’. So one day during our weekly phone conversations, I’m discussing how things are going with my business, it’s on my mind, so I let Dad know how much I appreciate them doing that.

He laughed. “Oh, it crossed our mind many times.”

Yet they never acted on that impulse, which makes me even the more grateful. Instead they told me how much I needed to work. When I sat my parents down and asked we were going to pay for college, they howled in laughter. “There’s no ‘we’ , YOU’RE going to have to get a scholarship.”

So when I earned academic scholarships across the country to attend college, when I finally finished graduate school after a plague of health and personal issues, when I began to switch gears from architecture to photography, when I started displaying my artwork and became a small business owner, he’s has unequivocally been behind me 100%. Always proud, no matter the success or failures. Dad’s attitude has always been, “He’s smart, he’ll figure it out if it’s something he should continue or not.”

My father taught me how to be a man and if I ever have children I intend to treat them with the same grace, dignity, firmness, and opportunity in which I was raised. Just Like Daddy is one of my earliest captures while pursuing photography as a hobby and was my Father’s Day gift to him several years back. Child in the foreground, father in the background, inspired by that snapshot from 1979.

I really couldn’t ask more than my father, who has always greeted life with sincerity and humility. So Happy Father’s Day to all the father’s out there, the single mothers who have to be daddy, and those out there who’ve pulled themselves up by the bootstraps because didn’t have or couldn’t rely on either parent. You will always have my utmost respect.