I had the pleasure of working in Austin, Texas for Rogers O’Brien Construction and O’Connell Robertson at the Ann Richards School for Young Women Leaders.  When I moved to Texas for college, Governor Ann Richards was in office. Today, the school bearing her name is a nationally top-ranked school, serving grades 6-12.  The students were highly engaged with this space, love their school, and their energy was contagious.  From the outside, the school carries materials and colors consistent with Texas vernacular, including wood-stamped concrete columns, with modern cues and design gestures.  The two-story building sits on a graded incline, navigated by a sidewalk, landscaping and accessible ramp. 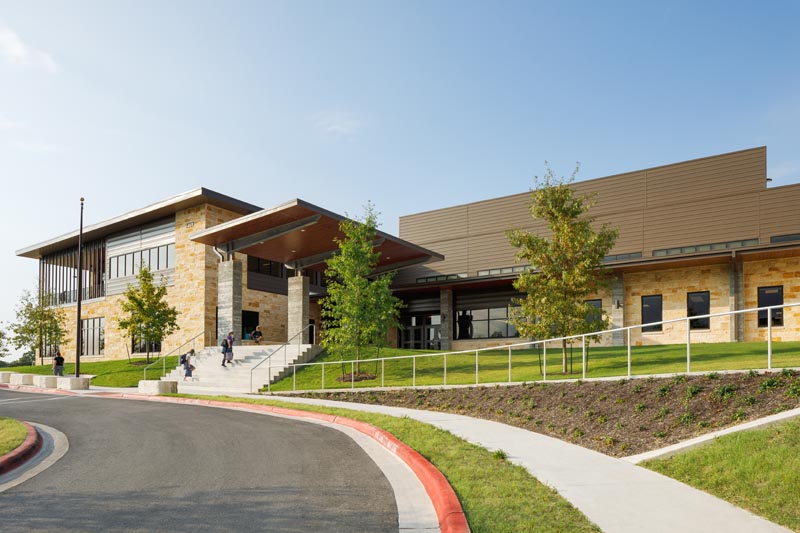 The commons area is a pretty spectacular gathering space where the day begins, in which generous fenestration facing the courtyard allows natural daylight to flood in.  Students can navigate up two different grand staircases towards the second floor. 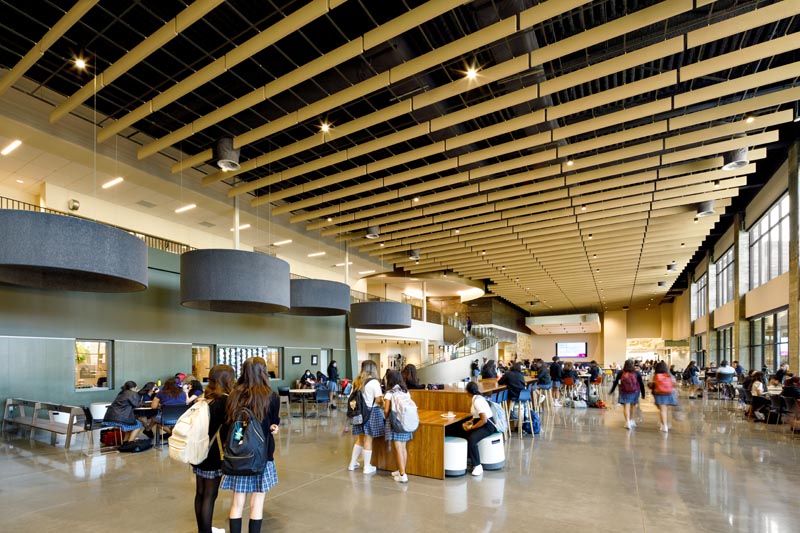 The rhythm of the commons area guided by the repetition of the acoustic panels above really compliments the energy of the student population. 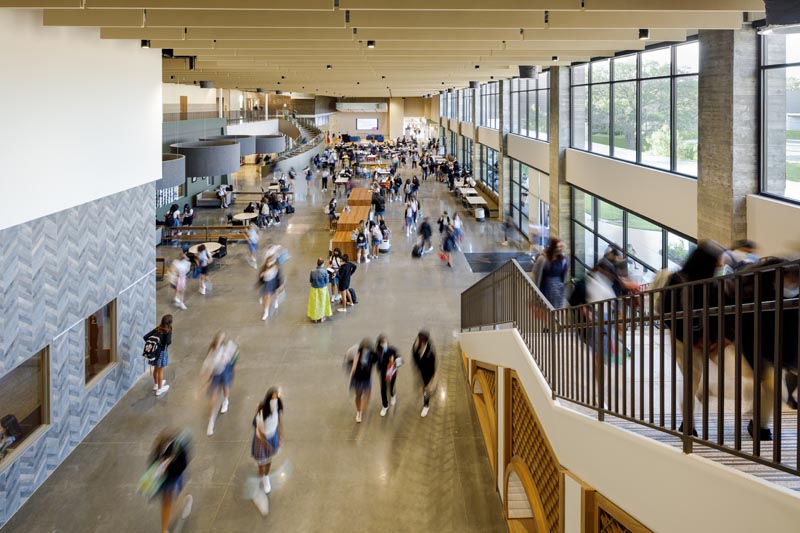 One of things I enjoy about modern school design is how architects are utilizing space in practical and aesthetically pleasing ways.  Students can make use of the individual cubbies and have small gatherings below the staircase. 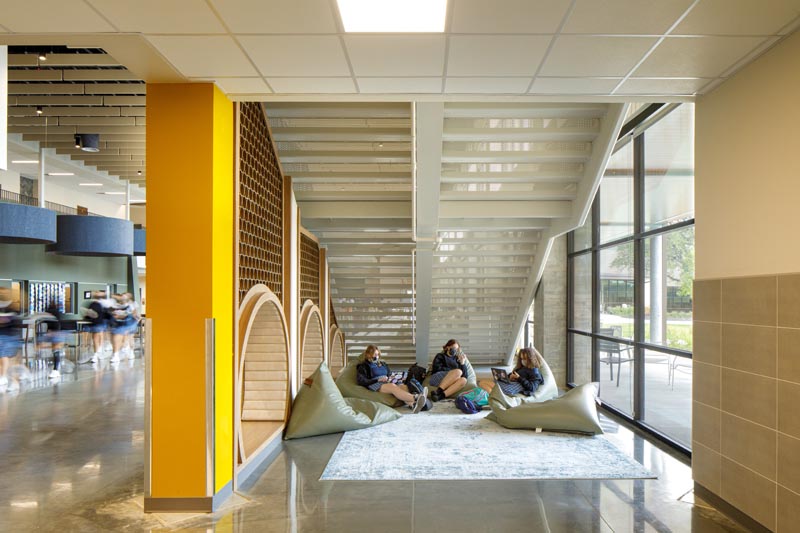 Located just past the commons space, the cafeteria makes efficient use of limited square footage to quickly serve a throng of students during lunch periods. 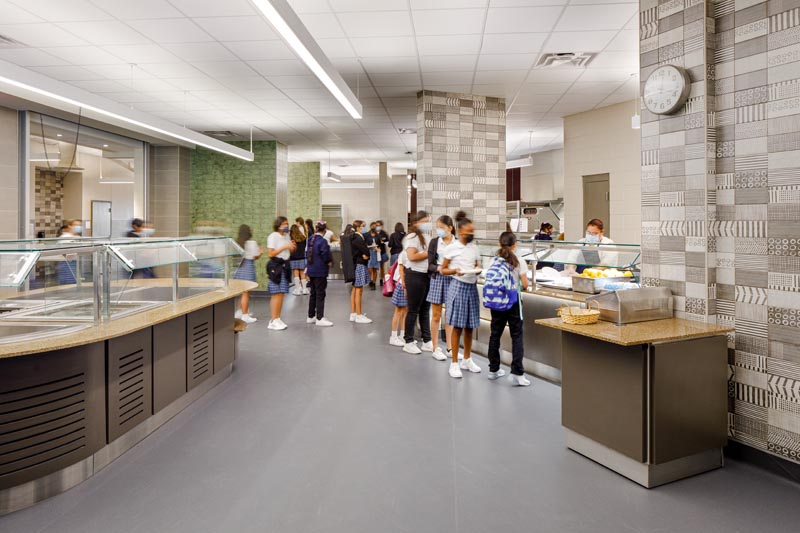 I appreciate the gathering spaces that lend to a sense of community prevalent throughout the entire campus.  The interior courtyard provides formal seating underneath the canopy and spaces for students to naturally pause and picnic among the landscape. 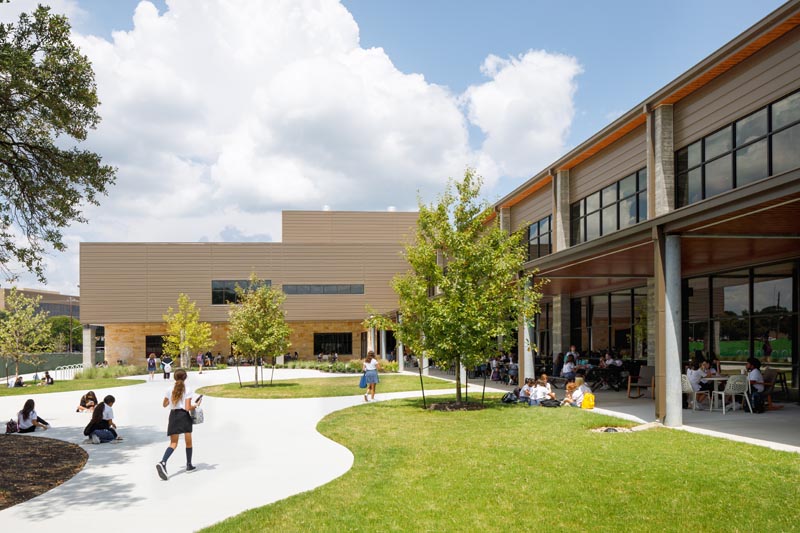 The library has a slide!  Similar to many modern libraries there is a stepped seating area for class presentations, and the mezzanine above is popular with everyone. 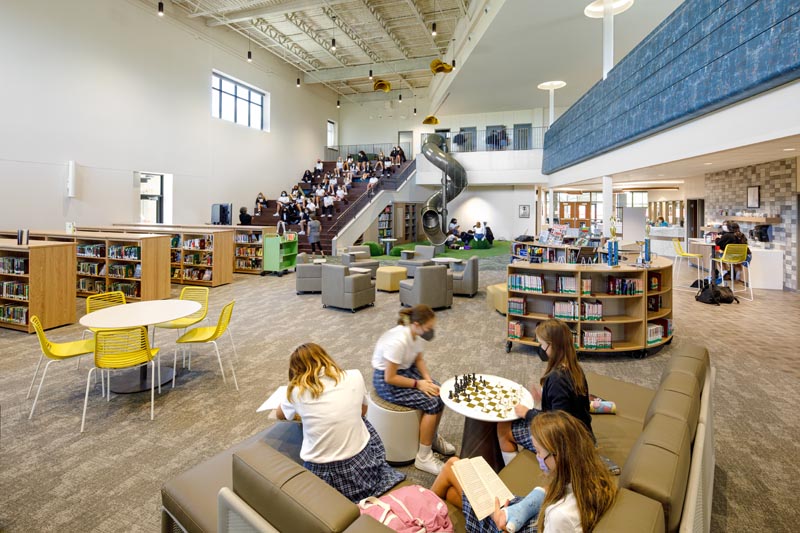 During the lunch period, student hurriedly grab tables on the mezzanine area and outdoor seating beyond that looks towards the Austin skyline.  Stairs navigate below (again, making great use of the space under) to library stacks, sitting areas, and a small computer lab. 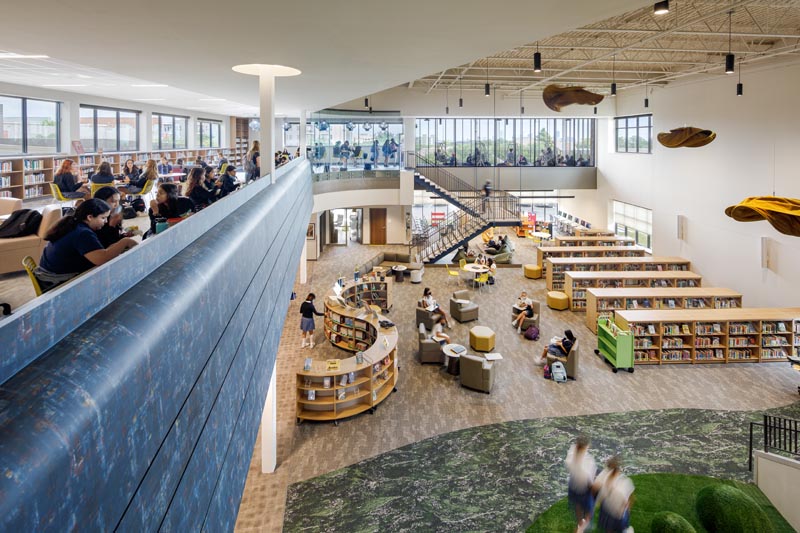 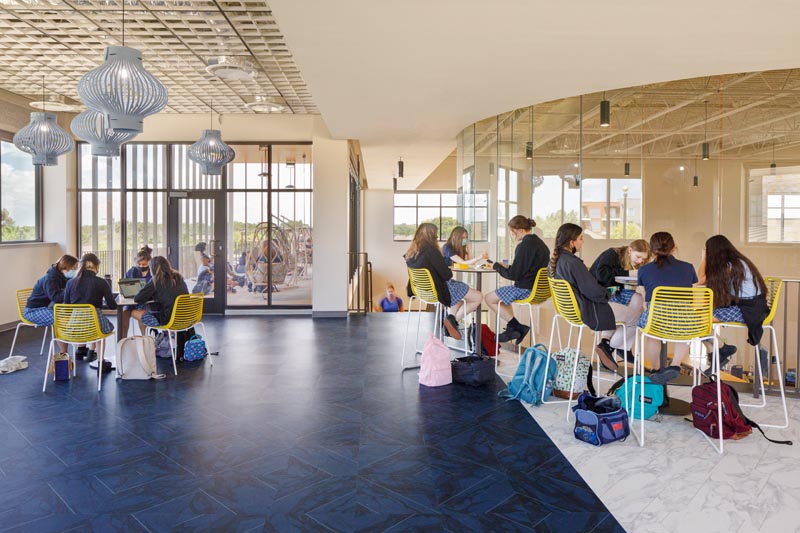 Transitions between circulation and program play an important role throughout the school.  Most commonly a designed entry or pathway narrows and expands larger public area that is bordered by smaller programmed spaces such as class and study rooms.  Some of these spaces make practical use for student storage and becomes a hive of activity between classes. 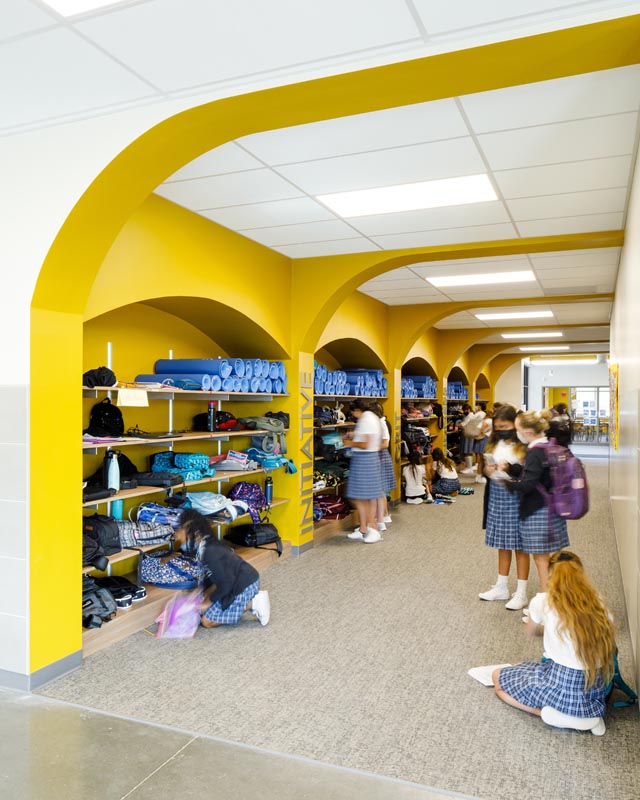 This gateway leads to another series of spaces, most immediately small group rooms beyond. 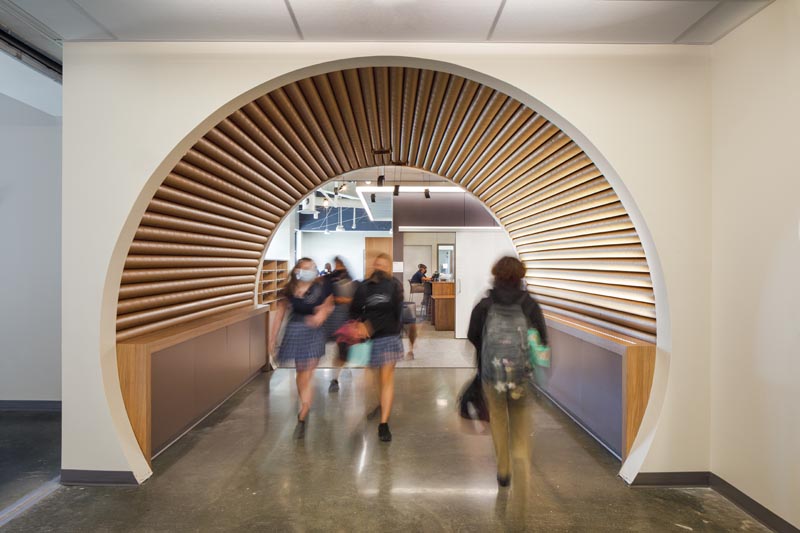 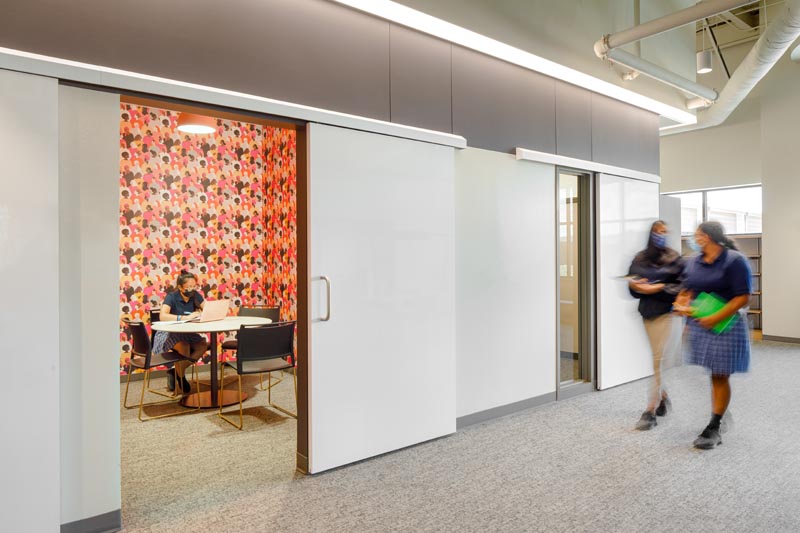 Classrooms are capable to open out and extend to the informal spaces and student gathering spaces beyond.  Again, in the study rooms you can observe the impact of the window graphics and wall coverings. 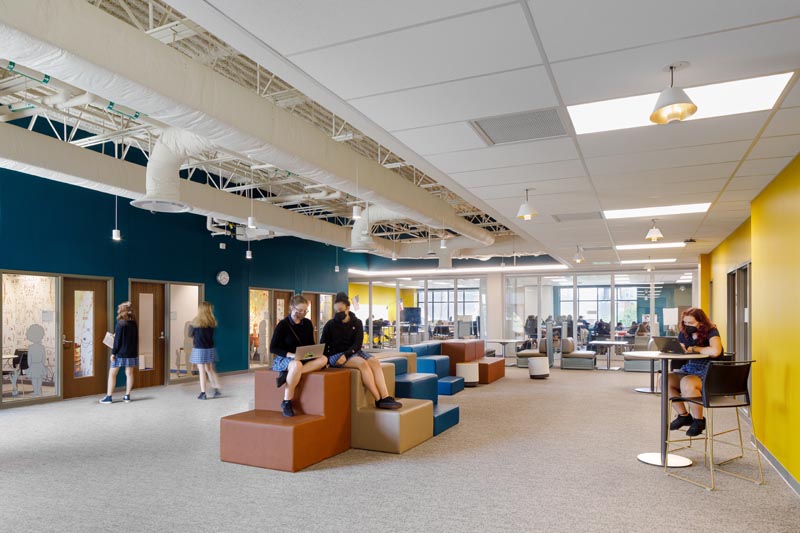 The Ann Richards school has a great arts and technology labs including 3D printing, CAD drawing, robotics, and computer programming. 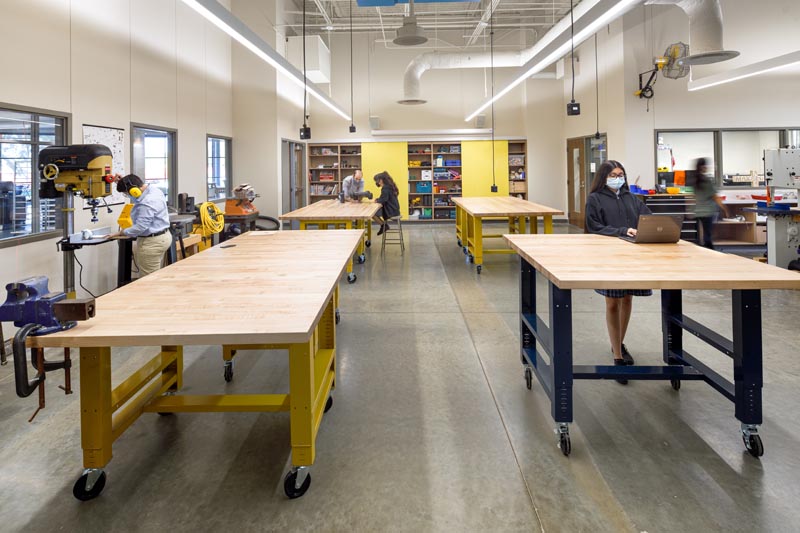 Students make traditional use of individual light tables in the film and photo lab and they’re…uh…doing something science-y in the science lab.  Even in spaces like this, there’s an option for generous windows and indirect light. 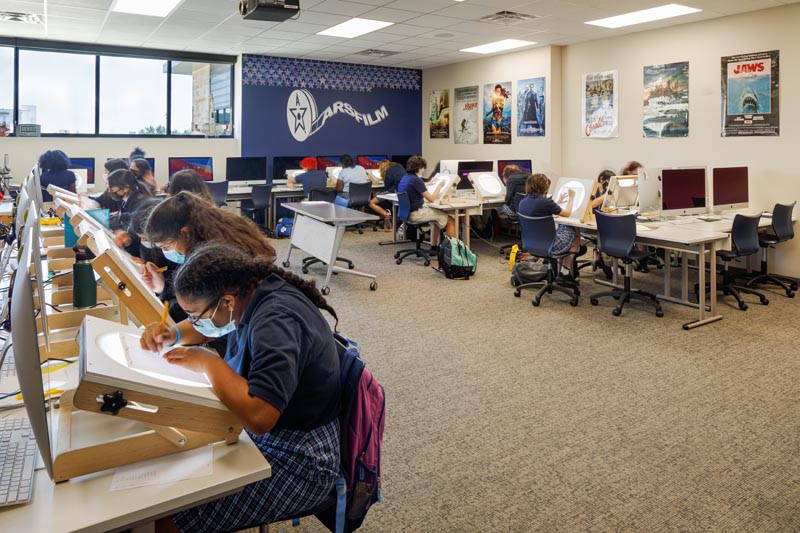 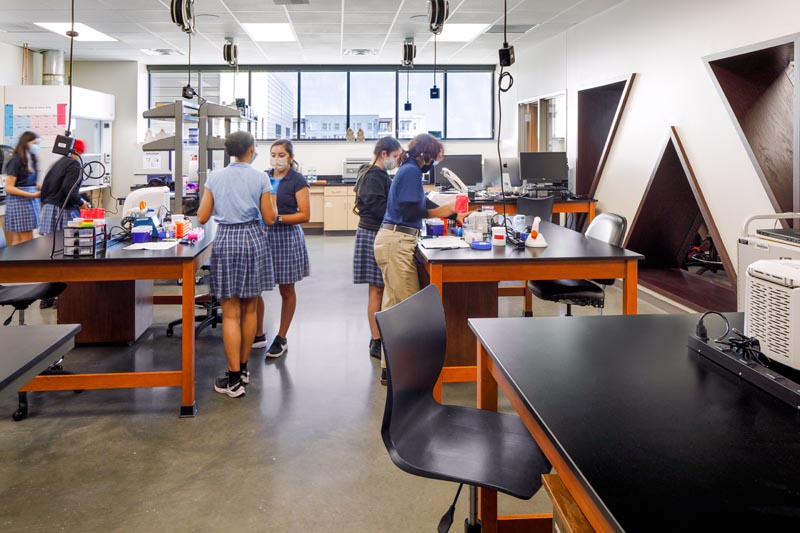 The girls are performing spike and digging drills in the gymnasium. 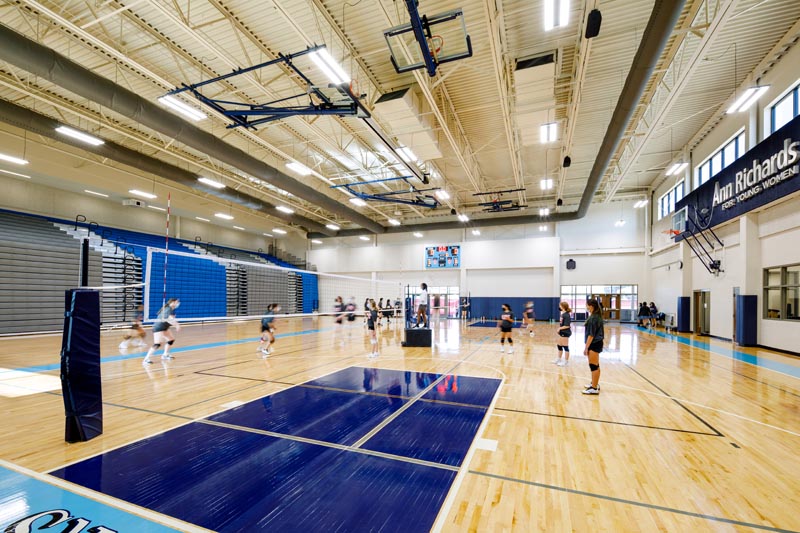 After school ends, an eager student looks out towards the bus queue past one of the school’s courtyards. 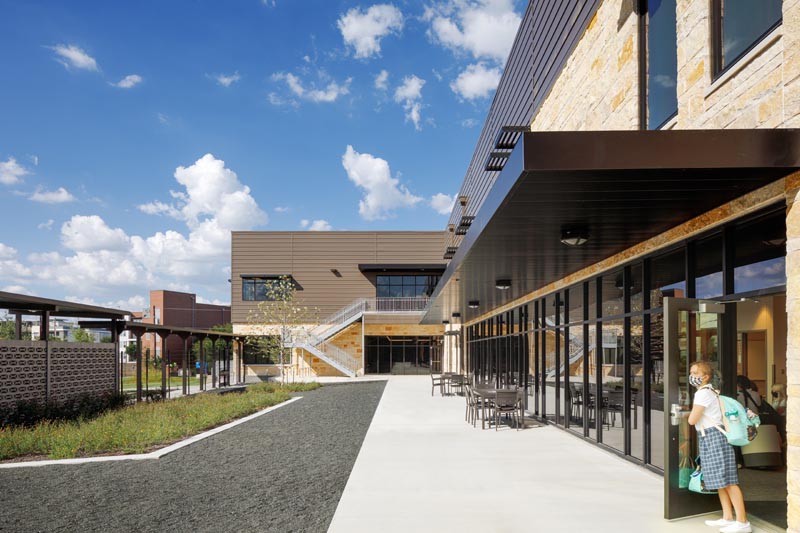 Finally, a night shot featuring part of the school’s front facade with sturdy canopy signifying entry.  Very inspiring space that matches the education and curriculum designed for future women leaders, and I was honored to both see and photograph it.  Until next time! 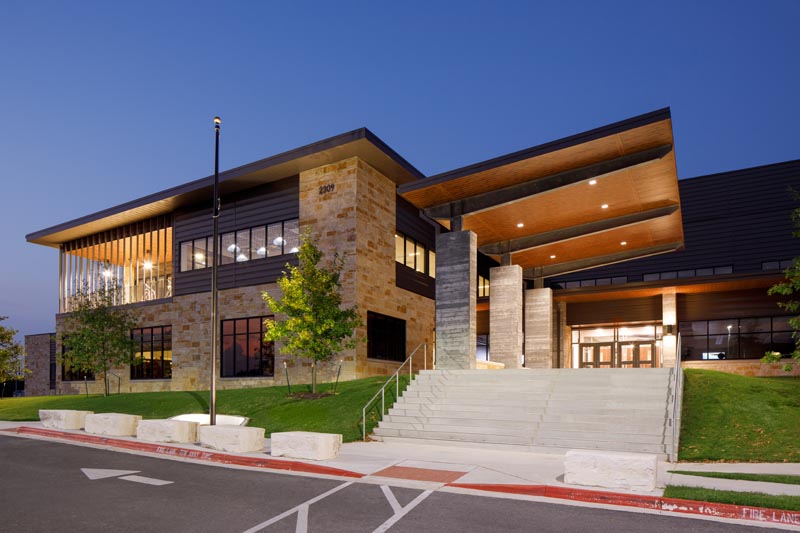