Beach vacations are for sissies.  This is part four of a recent series of blogs detailing recent vacation travel, focusing on the specific area surrounding Wilkes-Barre, Pennsylvania.  Before we get started, some pimping of previous blogs in the series:

I arrived into Wilkes-Barre the prior evening and first thing in the morning, pushed away the curtains to see this outside my hotel window.  Don’t see stuff like that everyday. 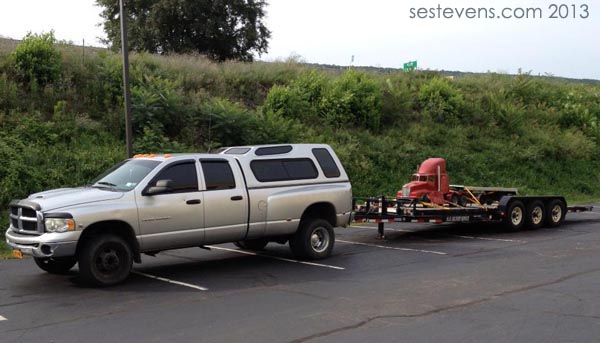 I was in the area to scope out the Huber Coal Breaker. 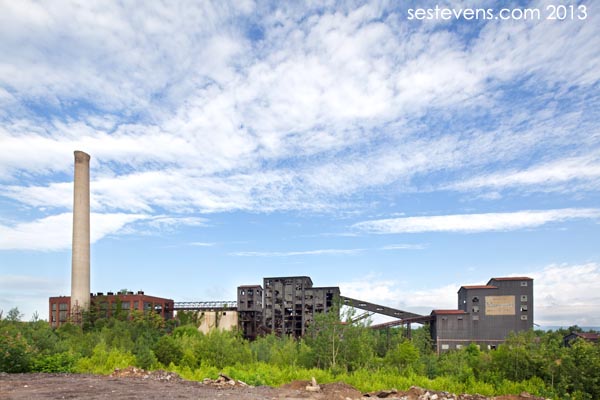 The previous day I had toured the St. Nicholas Coal Breaker and discovered some interesting spots on the way to this one. I was at the midpoint of my travels, had been on the road for a week, and was feeling physically and mentally sluggish.  By the time I walked to the entry of Ashley-Huber, I felt wiped out.  Because I wasn’t feeling on my “A” game, and lacked the mental alertness to safely go through all these structures, I only stayed an hour, capturing exterior images and accessing one of the smaller buildings.  As I figured out later evening, I had caught a head cold. With no additional days to spare I hated losing out, especially coming from out-of-state, but felt it the wisest decision. We’ll see its status a year from now but there’s an increasing likelihood that Huber will be scrapped before my next visit.  C’est la vie! (UPDATE: I later received full access to the Ashley Breaker! Yeah!) 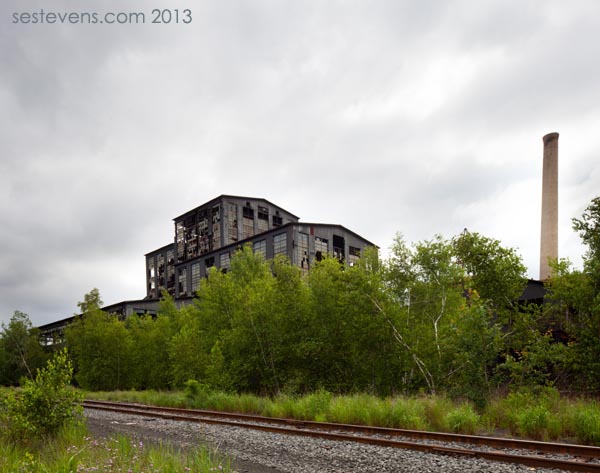 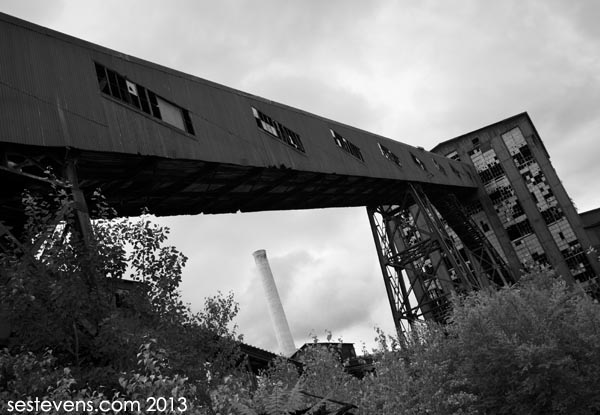 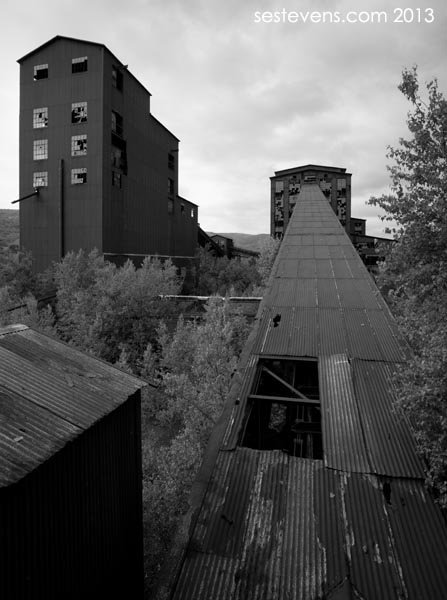 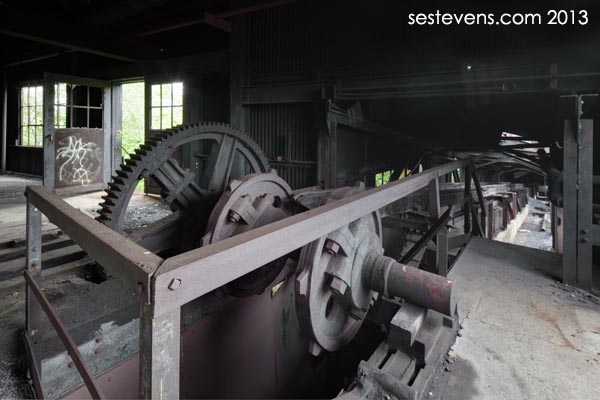 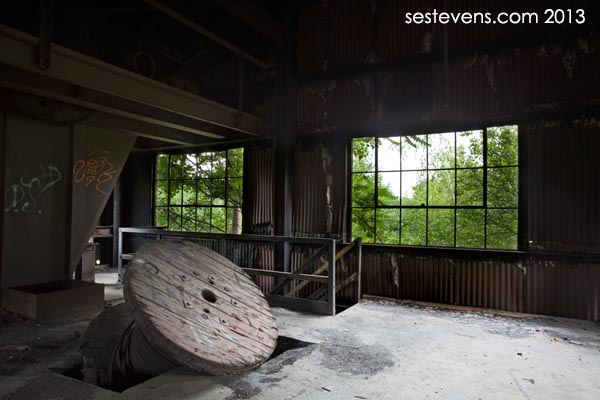 After I cut my visit to Huber short, I returned to my hotel to nap. Momentarily refreshed, I ventured towards Wilkes-Barre to walk around downtown. That’s where I stumbled across the Sterling Hotel.  By happenstance, I was actually named after a similarly-monikerred inn, only an hour away from this location. So I skipped in the second I saw it – how could I resist something like that? 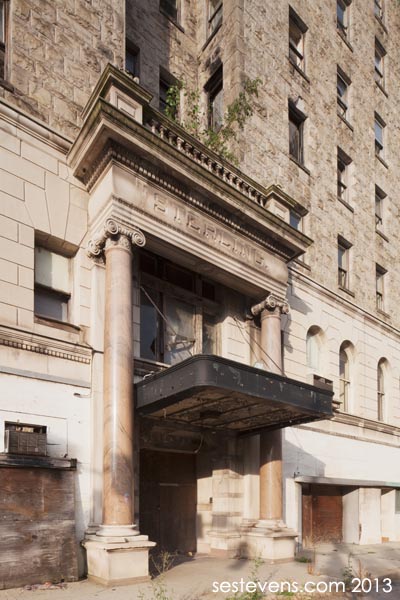 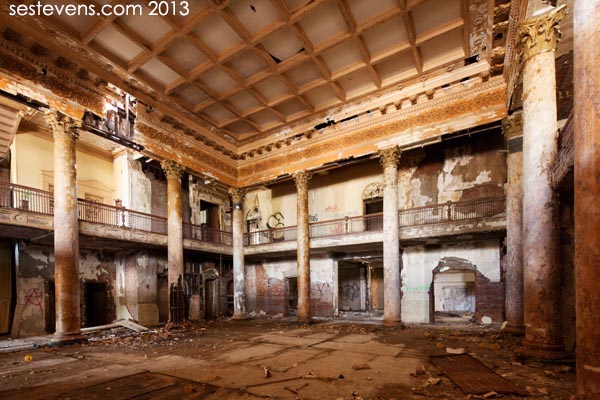 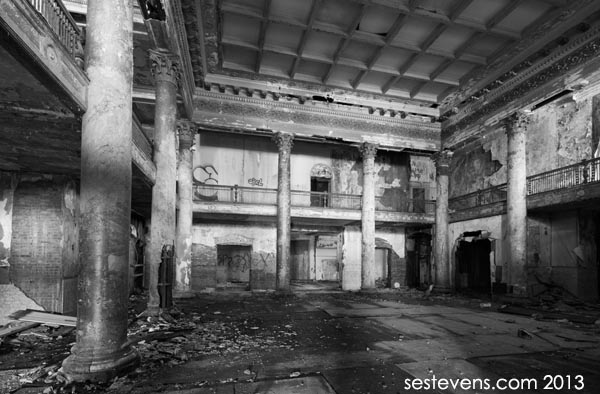 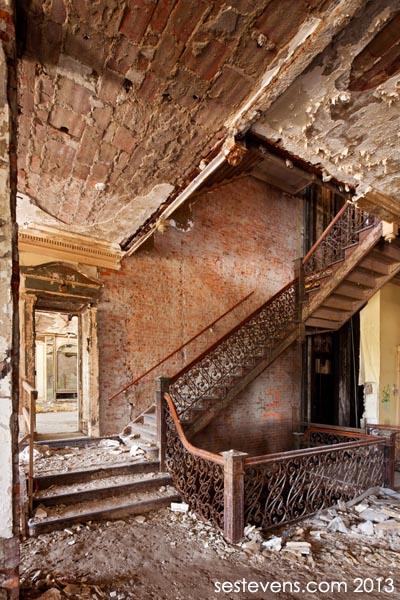 Upon exiting I set up a tripod to take pictures outside.  Since my visit, an electrical crew had arrived in front of the hotel and a man with a hardhat approached me.

“Hey, were just inside that building?”

No point hiding it, so I responded in the affirmative.

“Yeah, it is structurally safe in there, I wanted to show my intern what it looked like inside.”

Amazing.  It turns out this electrician was a native of Wilkes-Barre and we had a great conversation.  I responded the building was structurally sound, though one of the staircases (above) seemed iffy.  All of the hotel room floors were stripped bare to the shell.  He told me a bit about the history of the abandoned hotel and informed me that Sterling was slated to be demolished any day In fact, they were removing the light poles from in front of the building. Less than three weeks later, that’s exactly what happened.

He advised some other locations and towns I should visit (I made careful notes), then pointed to a large domed building.  “If you can get inside you should check that out, that’s been shut down for awhile.”

You gotta be kidding me. I just got recommendations? 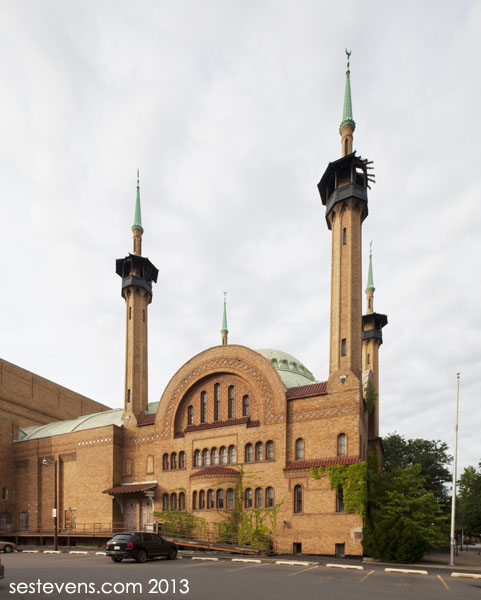 What was it doing in the center of Wilkes-Barre? Why was it closed? And why could I… 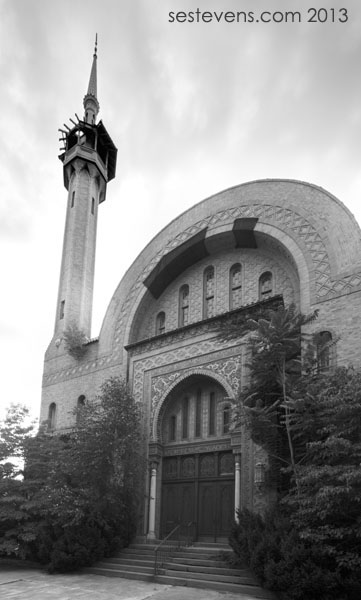 …holy crap, look at the INSIDE of this place. This is the Irem Temple Mosque (apparently they couldn’t decide between temple and mosque), a century-old Masonic shrine temple. There is a Facebook page dedicated to its restoration. 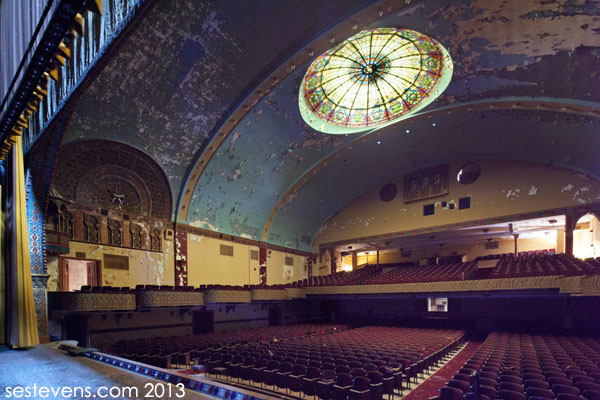 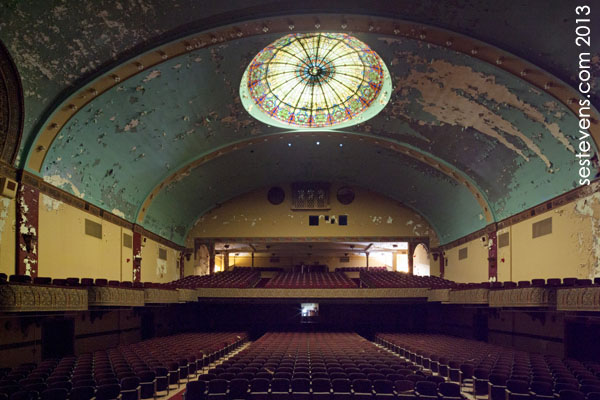 These photos were very long exposures and I wound up “painting with light” with a pair of flashlights. 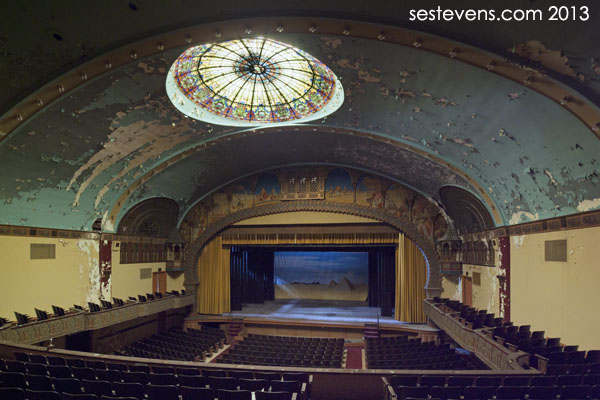 The day was ending, and I retired early to get some desperately-needed rest so I wouldn’t become sick for the remainder of the trip.  Of course, I went to the restroom before I left… 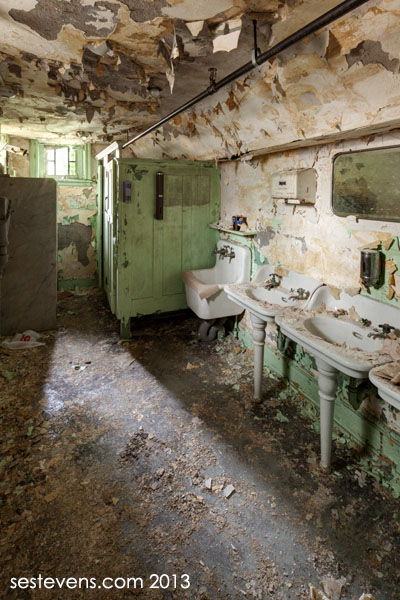 The next morning as I exited Wilkes-Barre and stopped by a warehouse area I was drawn to. 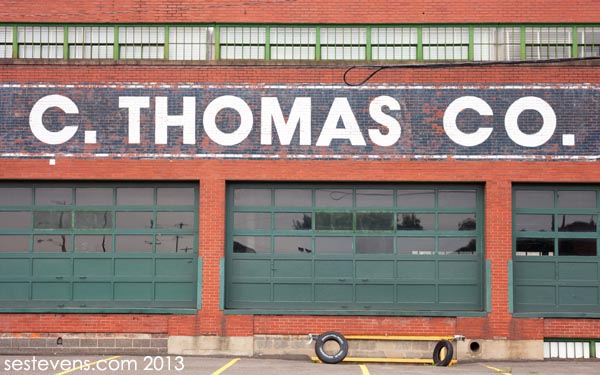 As I stood on the public sidewalk, shooting this space, a man emerged from the door to the left, down the stairs, and towards me.

The man asked what I was taking pictures of, I said the inside of the loading dock intrigued me.  He then stated his name – the same name proudly painted on the side of the building.

He then informed me he was a photographer himself, and that his photo club had a show in the local post office.  Go ahead and take pictures.

It gets better.  As I’m taking pictures, an older gentleman slowly walks up to me and asks what I’m taking pictures of. He introduces himself as Pete.  As it turns out, Pete is in charge of maintaining several buildings in the area including this one.  He inquires if I’ve met the owner.

Pete follows, “Yeah, but have you seen his camera collection?”

The owner has hundreds – HUNDREDS of antique cameras.  Rangefinder cameras.  Pinhole cameras.  Field cameras.  Polaroids.  Zeiss’s.  Kodaks.  I gawked at his used collection that he accumulated over years from flea markets and yard sales.

Pete, also a native of Wilkes-Barre, provided tour of the building’s inside – all of the original equipment from the 40s and 50s – scales, belts, refrigerators, lifts – were still there and in impeccable condition.  It was an old shipping facility that no longer served that purpose.

Say…can I take a picture of your office?  I point to the door.

We continue to speak for an hour.  Pete’s worked in the area since he was a teenager, informing time of various buildings in the area – some abandoned, others renovated, others inaccessible.  What an incredible man and he curses like a sailor..  Pete complained about today’s society and how, “In America, everybody used to help each other out.  What happened to this country?  Everybody’s just out for themselves and it’s all gone downhill.” (you may imagine my surprise as this is <i>not</i> a conversation I typically hear in the South).  Every 15 minutes I asked with a mischievous grin, “C’mon…that office rocks!  Just one picture.” to which he laughed with mild embarrassment..

“No, no, it’s awful in there!” He attempts to shut the door, “Half that stuff isn’t even mine, it was just there when I got it!” (based on our conversation, I estimate that had to be at least two or three decades ago). 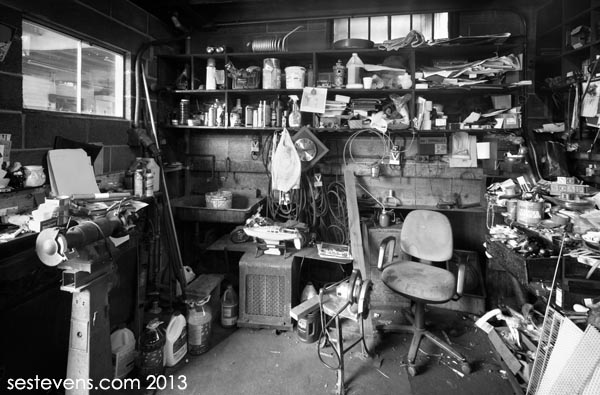 I pause here – one, to express gratitude to the over friendliness of the people I encountered in Wilkes-Barre, but two, to also mention how much of a shock this was.  These are not conversations I have capturing photographs throughout the South, which I will elaborate further in my next blog post, as the surprises kept coming.

Finally, I stopped by another building that seemed to be previously renovated but relatively unoccupied.  At the time I arrived, there was work being done and unfortunately the owner was tied up in a meeting.  He did allow me to take pictures of the outside.  Kinda curious if anything decent is left inside; I’ll find out next time around. 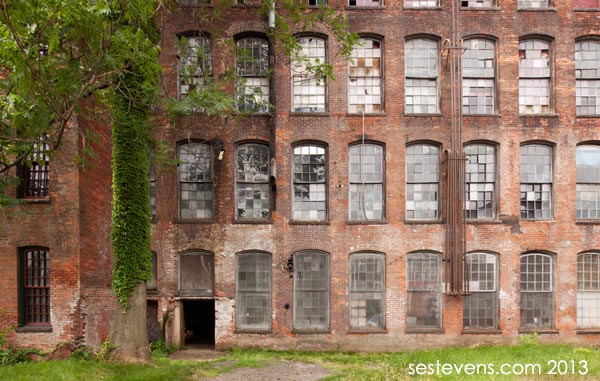 Speaking of next time, that’s when I’ll be seeing ya. 🙂