Behind the Image – One Chicago Moment

Though photography is more accessible than ever through digital technology and social media, the category of environmental photography seems to remain somewhat misunderstood and under-appreciated as an art form. For example: a couple years ago, a woman I went on a date with, upon finding out I was a photographer asked, “So…you just like, take pictures of what’s already there?” Yes- NO- wait, it’s not as simple as – WWwwhhhaatttTT??!! Okay, hold up – this date’s OVER, lady.

Photography does not need to be mere documentation that concludes a series of transpired events and it’s certainly much more than depressing the shutter and reflecting exactly what’s in plain sight. It’s an artistic craft that requires patience, anticipation, and design. We really do “paint with light”. Have you ever analyzed impressionist (and many post-impressionist) oil paintings, particularly those of urban depictions? Even though this style of painting strays from mirroring exact scenes with hard, defined edges, it frees the artist to further manipulate light and movement, connect with the real and grounded understanding of the viewer, and simultaneously amplify that appreciation. Through masterful brushstrokes, scenes are carved out and inferred by the emanation and reflection of light versus shadow. A photographer’s understanding of how light impresses the eyes and psyche is quite similar. However outside of the modern miracle of Photoshop, environmental photographers cannot selectively ignore distractions or interrupting elements like painters can with a canvas.

This sort of impact of light was kept in mind when figuring my own take of the famous Chicago Theatre, after searching for images which featured the theatre’s marquis with results looking up, capturing segments, or viewed from across the street.

I’m greedy. I wanted the whole thing from top to ground.

APRIL 20, 2011: On the evening I arrived at the theater, I observed a subway entry (which I didn’t know about) that immediately changed how I previsioned the photo. Fortunately, there was no event taking place that evening and as a double bonus – ARETHA FRANKLIN was listed first on the marquis! How can you possibly beat that icon? What if that was Michael Bolton instead? I chose to capture the marquis from a near vantage point, which is where the 17mm tilt-shift came in super handy. The subway entry became the foreground object through which I’d capture the motion of people going to and from below. Instead of treating the Chicago Theater as an isolated subject with little environment beyond it, I chose to use surrounding elements to give it real, historic presence.

I kept settings at 1600 ISO stopped to F16. After some trial and error, I quickly figured out crowds passing directly under the marquis were distracting to the composition. Some tourists asked me to take pictures of them with their cameras (HINT: I am stupid – I DO NOT KNOW HOW TO USE YOUR CAMERA, PUUULLLLLLLLEASE TELL ME HOW TO USE IT.). After 15 minutes of shooting and waiting I felt that I struck gold. With nobody directly under the marquis, a young woman passed me and I quickly depressed the trigger as she passed through the subway entry. I reviewed the image on the rear LCD screen, was satisfied, and called it a night. 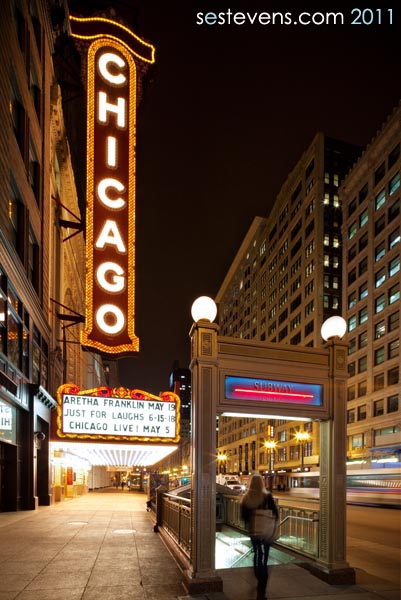 A couple weeks later, I took a first look at this image at full-resolution and discovered an inadvertent bonus. A bus pulled into the right of the photo frame, which added a streaking splash of color and movement, and proved to be the right finishing touch. Had I further increased the ISO, I would’ve likely missed the whole thing with a faster shutter speed. So remember, no matter how much you plan, there’s nothing like having a little luck om your side!

The only major digital editing involved the marquis itself. I wound up burning the text announcing upcoming shows and the light bulbs directly underneath because they came out a bit blown out. Otherwise, I was pretty happy with the final result and achieved exactly what I wanted to impress viewers with. Though this photography is a reflection of what I saw in front of me, what was critical was capturing the atmosphere, lights, and movement – the essence of Chicago, in one precise intersection of place and time. While painters often MAKE the right moments, environmental photographers ensure that they’re IN FRONT OF the right moment; both require the same levels of creative merit and observation with which to execute.